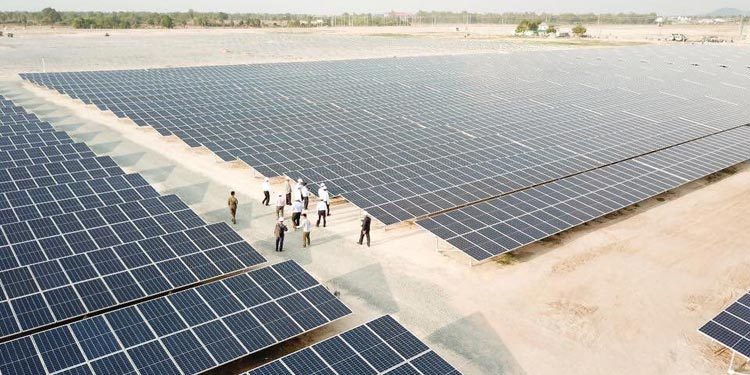 The report, by the Japanese news agency NNA, says the two companies are Aura Green Energy Co and solar panel system provider WWB Corp. They have teamed up to launch a hybrid power generation business, combining biomass and solar energy in Cambodia in 2021.

“Investing in renewable energy such as rice husk-fired power will help rice millers to reduce costs,” he said, adding the investment should be located in a cluster of rice millers that could provide a self-sufficient supply of energy.

Under the $3.7 million project, the combined green energy facilities, with a total output capacity of 1,500 kilowatts, will supply power to the rice mill of Angkor Kasekam Roongroeung Co, a major local rice producer, in Kandal province, adjacent to the capital, with a plan to sell any surplus to a local power company.

“Even though the companies could produce both rice husk power and solar energy, they will still not benefit much from it if they are still connected to the national grid for power supplies,” he said.

For Yeng, the high cost of electricity is still the main challenge for the rice sector that creates higher production costs. However, he said the quality of electricity supply is more important.

“Sometimes, when the electricity is cut off, it damages 400 to 500 tonnes of paddy rice that is being dried, the damage is the cost of investment,” he said.

Cambodia aims to produce at least 390 megawatts from solar farms by next year – 15 percent of total power supply.

A host of solar energy projects was approved earlier this year after the country was hit by power shortages last year. Some of these recently approved projects will come this year.

The Asian Development Bank (ADB) in 2019 approved a $7.64 million loan to support the construction of a 100 megawatt (mW) solar power park in Cambodia to help to contribute to the development of renewable energy and diversify the power supply that can improve the country’s competitiveness.

The two Japanese companies established a joint venture in Cambodia in February for the business.

The project is partly subsidised by the Japanese government to the tune of about 110 million yen (over $1 million), under the Joint Crediting Mechanism, a greenhouse gas emission reduction plan to exchange reduced carbon dioxide emissions. Aura Green Energy estimates the project will contribute to cutting 1,316 tonnes of CO2 emissions annually from biomass power generation and 565 tonnes from solar power.