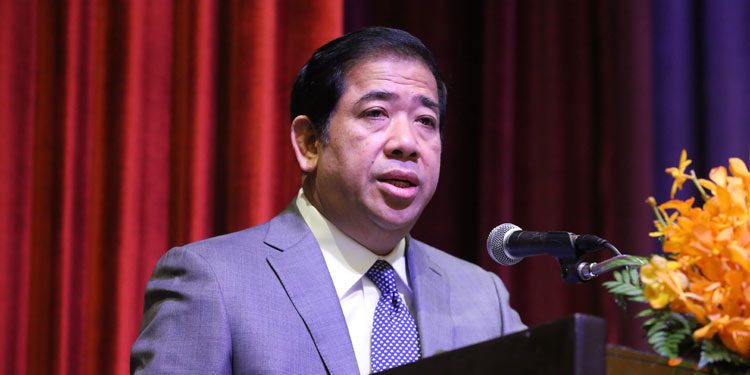 The government has issued a directive (prakas) on tax arrears management aimed at supporting the process of efficient, effective and transparent tax arrears collection.

Prakas number 962, signed by Deputy Prime Minister and Minister of Economy and Finance Aun Pornmoniroth, was issued on Nov 20.

This directive is inclusive of all taxpayers with payments currently in arrears. It defines tax arrears as all taxes and duties taxpayers that have not been paid within mandated deadlines. Tax arrears are now subject to penalties for late payment.

The prakas added that taxes deemed in arrears are classified as being the result of negligence, severe negligence, or deliberate tax evasion on the part of individuals or enterprises. The status of people or enterprises being in arrears, has been further defined as lateness in submitting tax declaration letters, lateness in paying taxes and currently seeking adjustments to a tax declaration letter.

Additionally, the prakas states that taxpayers who have paid an amount of tax later deemed insufficient during an audit process are also in arrears. These audits types include the desk audit, limit audit and comprehensive audit.

Article 5 of Chapter 2 of the prakas states that in the event of taxpayers failing to pay their arrears within 15 days of having received a reminder notification letter of tax arrears, they will now have to pay a penalty of an additional 25 percent of the arrears owing.  An interest rate of 1.5 percent per month will accrue on balances of unpaid tax arrears.

The directive added that upon failure to pay arrears within 15 days of having received a reminder notification that tax officer will take stricter actions in arrears collection.

Article 9 of Chapter 3 states that to ensure the effectiveness of tax arrears management and tax collections, the General Department of Taxation (GDT) will communicate or pay on-site visits to taxpayers’ homes or business places to seek clarity as to why delays in payment continue and give any additional information needed on how to pay the arrears.

GDT mechanisms to discourage tax arrears include a temporary ban on property or real estate transfers, the withdrawal of tax incentives provided by the tax authorities, the suspension or cancellation of business permits and licences issued by the tax administration, disqualification from tax registration, and public announcement of the names of the individuals or enterprises in arrears. Group Chief Executive Officer of corporate finance firm Cambodian Investment Management Anthony Galliano said the issue of uncollected tax receivables, a good portion of which are significantly aged and still on the GDT balance sheet, is being addressed by this prakas.

He said that from the GDT’s perspective, assessments are issued, at times for substantial amounts, and assessed companies submit a series of objections in an attempt to reduce the liability assessed, or prolong payments as long as possible, at times with no intention to pay.

“Even though assessed, companies continue to operate freely and ignore the tax assessment for years, eventually either abandoning the company, or starting a new one.  The prakas empowers the GDT to take additional action that is currently not available to them under the Law of Taxation, and this will facilitate cleaning up the GDT balance sheet if debts are deemed uncollectible,” Galliano added.

He said that what is absent from this prakas, is further empowerment of the taxpayer if such assessments are materially incorrect or frivolous.

“Although a thorough objection process exists under the Law of Taxation, the common thread among audited taxpayers is that audit climates can be difficult and sometimes can be seen as lacking fairness and objectiveness [by those undergoing the process].”

He added, “Undoubtedly there are registered taxpayers who regularly evade tax, and the GDT should have all the powers and means to collect arrears and be able to use punitive measures to ensure collection and application of the appropriate penalties and interest. It is honest and compliant taxpayers that need additional support mechanisms currently not available to them under the law, an expeditious system that will assist them when there is a question of fair treatment or frivolity in how their tax issue is being handled.”

Article 10 states that to deter intentional tax evasion and non-payment of tax arrears, the GDT will implement strict measures on those failing to pay their tax arrears.

These include the GDT requesting the cancellation of business licences issued by the authorities, seeking the suspension of business activities, putting temporary holds and locks on bank accounts, seizing inventories of goods and chattels, halting import-export operations, confiscation of property and filing suit in court.

It added the GDT classified arrears into two types of debt: those that can be collected by the implementation of collection measures and arrears that cannot be collected because the taxpayers have no ability to pay them.  These are defined as non-collection tax liabilities.

The directive added: “Tax arrears cannot be classified as non-collection tax liabilities until the tax debt is more than 10 years old, or if the taxpayer has a disability, or no assets to pay the tax debt, has been declared in bankruptcy by court issue, or has been affected by a disaster declared by the authorities, depending on their assessment of damage and other criteria.”

“All the measures and procedures considered in the declaration of tax arrears being non-collectible will be determined by the General Department of Taxation,” according to the directive.