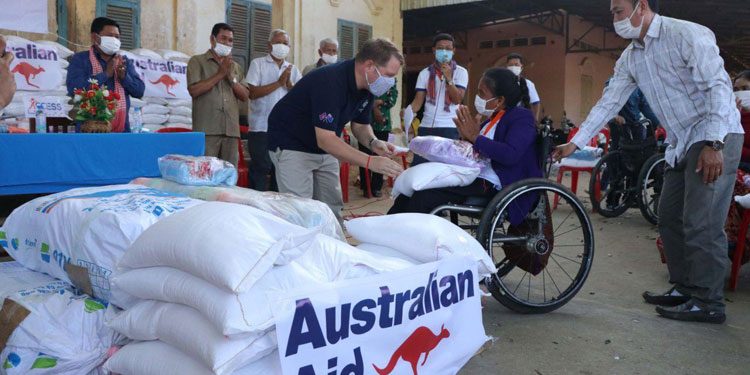 Arnold said during the handing over ceremony that Australia has now donated 10,000 kilogrammes of rice, 10,000 cans of fish, 4,000 bars of soap and 1,000 mosquito nets to persons with disabilities and their families in these two provinces, both of which have been severely affected by the floods.

“Persons with disabilities already face a range of challenges and these have been exacerbated by COVID-19 and the floods,” he said. “That is why the Australian government is putting them at the centre of our flood relief efforts.”

Pak Ran, a flood victim with visual impairment, said that the recent flash floods have affected her rice fields and the damage is causing her much difficulty.

“The recent floods have damaged our rice fields, which we depend on as a primary source of food. As my blindness makes it difficult to find alternative sources of food, these timely and much-needed flood relief items from the Australian government are a real blessing,” she said.

“I express my heartfelt sympathy to all flood victims and their families here in Kampong Speu province and across the country. The vulnerability of persons with disabilities is magnified when a disaster strikes. That is why the Australian government has chosen to highlight the needs of Cambodian persons with disabilities as part of our flood relief response,” Ambassador Kang said.

Ou Sombo, director of the Cambodian Disabled People’s Organisation (CDPO) in Kampong Speu, said at the event that flood relief is important for people with disabilities who are affected.

The supplies will help to combat the adverse effects faced by vulnerable communities by reducing the incidence of infectious flood borne diseases by directly promoting the provision of essential food products during this crisis, the embassy said.

The flood kits were mobilised through Australia’s Access Programme, which promotes disability inclusion and the elimination of gender-based violence in Cambodia.

The package totals over $366 million and comes on top of the regular development cooperation programme – around $50 million annually in Cambodia – and a recent announcement of a further $366 million to assist Australia’s Indo-Pacific neighbours to roll out a COVID-19 vaccine, he said.

It is Australia’s largest non-loan package of assistance to the region in decades and Cambodia will be a key partner and beneficiary.