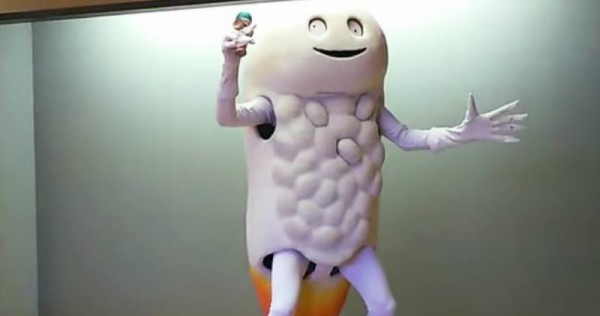 A town mascot that is an unlikely combination of sushi rice and a clam has won the title of Japan’s “most unforgettable” official character.

Zushihocky was created to represent the town of Hokuto, Hokkaido, in 2013, since when the character has consistently turned heads due to its bizarre appearance.

Startlingly white, with an outsize head atop a lumpy body that represents the rice, Zushihocky has long, gangly arms and legs and a disconcerting smile.

Local officials have admitted that Zushihocky regularly makes small children cry during appearances at promotional events. The creature has its own page on the city’s website and has starred in a series of YouTube videos.

But while the mascot has not always been a hit with the children, Zushihocky proved more popular with the judges of the competition for most unforgettable character, an event organised by Wavedash Co., a Tokyo-based website management company that promotes local communities.

“Zushihocky first appeared seven years ago and is a design that brings together two of our local products: local Fukkurinko rice and ‘hokki-gai’ clams,” said Takahiro Nishiyama, of the city’s planning division.

“We are very happy to have won this award and we hope that this recognition will encourage lots of tourists to come to Hokuto and try out special local sushi,” he said.

Regional mascots are considered an important promotional tool in Japan, where most domestic companies – as well as government departments and private organisations – use cuddly characters to stimulate interest in their products or work.

The highlight of mascots’ year is the Yuru Chara Grand Prix, which takes place every November to select the best character. The 2018 event attracted more than 900 entrants.

And while an obsession with odd-looking characters has been described as a very Japanese pastime, Kyle Cleveland, a professor of Japanese culture at the Tokyo campus of Temple University, said the thinking behind mascots was relatively simple.

“These are media-produced iconography that have been created as a cultural artefact that a town then can market to visitors,” he said. “And when this character becomes popular, they are able to sell items bearing the image.”

Zushihocky and hundreds of other characters appear on products ranging from key rings to lunchboxes, handkerchiefs and countless other knick-knacks that are snapped up by tourists looking for a unique souvenir.

“You also have to remember that a lot of these rural towns and communities are really languishing and have become depopulated,” Cleveland said.

“So they are grasping at anything that they are able to monetise and use to promote the local culture, so these mascots can become an important local stimulus in areas that have become otherwise moribund.”