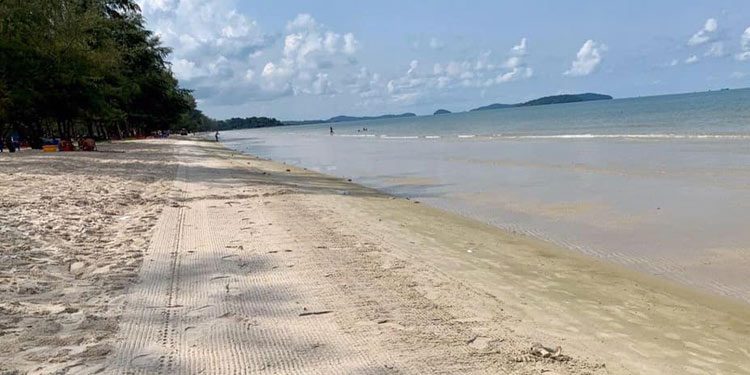 Preah Sihanouk provincial authority is to establish a master plan to develop the beach in the province, especially the new stretch of bays from Sihanoukville Autonomous Port to a new area called “Chumteav Mao or Madam Mao Beach”, according to a senior tourism official of Sihanouk province.

Taing Sochet Krisna, Preah Sihanouk provincial tourism director, said most of the bays in the city are jam which present challenges

to further development. However, the new beach, “Madam Mao Beach” is big. Thus, the province can develop it. However, Krisna could not give details on what projects will be built on it.

“We are studying the infrastructure such as roads, rest rooms, parking, parks and volley ball courts on the beach among other facilities. Once we finish the study, we will send the plan to the Preah Sihanouk Provincial Council, and the National Committee for Coastal Management and Development of the Cambodian coastal area (NCDD) to approve,” Krisna added.During the meeting on

the development of Otres 2 Beach, with relevant stakeholders in the province, Sihanoukville Governor Khouch Chamroeun, said that the province will also setup an entertainment park for Otres 2 Beach for the public.

The project for Otres 2 Beach was designed and built by Otres 2 Management Company.

Otres 2 Beach is 1,746 metres long and the plan is to contribute boosting the image and cleanliness of the area to attract tourists, to increase the beauty of the public beach, to protect the environment and social order, to provide good sanitation, to boost services and to make tourism products more sustainable.

Chamroeun added that the he also guided the company to continue studying other beaches from Sihanouk Autonomous Port to Madam Mao beach which are about 15 kilometres apart to seek renovation ideas and make it more serviceable to the public.

“When we lose the beach, we will lose the tourists,” Chamroeun said.

He added that the beach must be properly prepared with both rock and sandy bays. Exotic birds such as peacocks and other animals will be introduced to attract tourists.

“There should be no charge for tourists who bring tables, chairs and mats to the beach because it is a public space. However, we need joint developers to clean it and maintain its beauty by removing waste,” he said.

According to Preah Sihanouk provincial tourism, from January to April, there were almost no international visitors to the coastal province of Sihanoukville. Those who did come to the province were locals or foreign tourists who live and work in Cambodia. Numbers have risen in this month. The number of