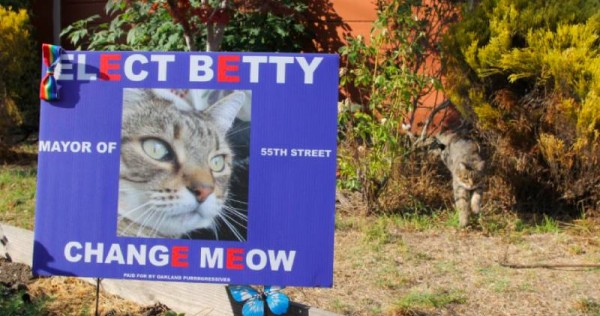 OAKLAND, Calif. – One Californian neighbourhood had had enough of the acrimonious atmosphere among people ahead of the Nov. 3 US elections.

So the local street’s mayoral contest this weekend will be fought by cats and dogs, instead.

The 55th Street mayoral race in Oakland started with an incumbent cat named Wally running unopposed, but then other pets pounced at the opportunity to make the race competitive.

“We decided our cat Betty seemed mayoral and that maybe we needed a change on 55th Street and we thought we’d just jump right in,” said Kirstyn Russell, a 49-year-old photography teacher whose 10-year-old Tabby has a campaign sign in the yard with the slogan ‘Change Meow.’

Russell’s daughter Maeve, 8, is naturally going to cast her ballot for Betty.

“She’s really good and she wants to crush the patriarchy, and so that’s why I’m going to vote for her. And she’s awesome,” Maeve said.

Mary Owen, a 57-year-old project manager, has an 11-year-old Shiba Inu named Mimi, running with the slogan ‘She’ll bark when it matters.’ She said the light-hearted race was a much-needed reprieve from the anxiety of 2020, as well as a chance to share the importance of civic engagement with children.

“Mostly we’re teaching the kids about democracy and about fairness, equity, justice. And we’re going to have all the kids make a choice, put it in the ballot box, have a little talk about democracy and our country, and of course candy because it’s Halloween night,” Owen said.

“She keeps the squirrels away and she’ll keep pretty much everybody in line here on 55th Street.”

The ballot will – as in California’s actual elections – feature ranked voting, in which voters rank their preferred candidates.

“People are really responding to just how fun this is,” Kadner said. “(It’s) just a way to enjoy our neighbourhood.”