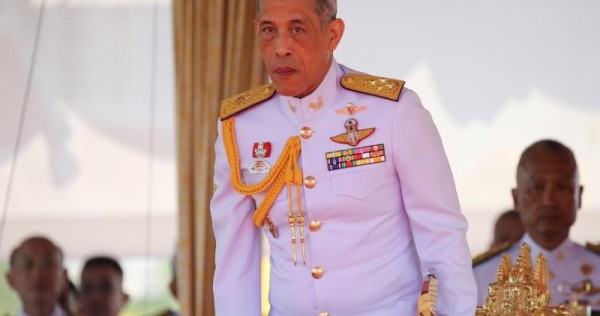 King Maha Vajiralongkorn’s visit to Thailand this month has been marked by many pivotal moments.

Just over a year after his official coronation ceremony and barely four years since he ascended the throne after the death of his father, King Bhumibol Adulyadej, Vajiralongkorn is faced with a challenge on a scale not seen since the end of the absolute monarchy in 1932.

For the first time in history, a Thai king is under scrutiny by a foreign country after tens of thousands of disillusioned Thais marched to the German embassy in Bangkok on Monday, demanding action from the German government.

German Foreign Minister Heiko Mass said amid the heightened political tension that Germany was “continuously checking if there are things that we find to be illegal”, adding that there would be “immediate consequences” if so.

“The German government has taken the view that it is not yet of the opinion that the Thai king has continuously conducted business,” the source said.

In a letter to the South China Morning Post this past week, Tull Traisorat, the consul general at the Thai embassy in Hong Kong, also rebutted reports that the Thai king was performing government duties in Germany, saying his visits to the country “are a private matter, and are acknowledged as such by the German authorities.

“During his visits, His Majesty the King always adheres to local laws and regulations as any other visitor does,” Tull said, adding that it was “highly unfortunate that information about the monarchy has been widely distorted and inappropriately politicised.”

In early October, the king, 68, who had returned to Thailand from the Grand Hotel Sonnenbichl in the Bavarian Alps, which he had rented out for him and his entourage to stay throughout the coronavirus pandemic, was met with growing street protests in Bangkok against his rule and conduct.

But the student-led protesters’ “10 demands” – a declaration first read out in August that calls for transparency regarding the king’s assets, the removal of his legal protections, the ending of the lese majeste law that prevents criticism of him, and the ban on the king’s ability to intervene in Thai politics – have gone unheeded by the royal palace and the government of Prime Minister Prayuth Chan-ocha.

Pro-Prayuth MPs, led by Paiboon Nititawan, used the special Thai parliamentary session convened on Monday and Tuesday, which had been intended to discuss the political crisis, to instead slam the students’ demands, saying that they could lead Thailand into becoming a republic and that Prayuth is the best person to prevent that from happening.

Pita Limjaroenrat, leader of the opposition Move Forward party, responded that the monarchy needs to be realigned to fit the changing context of society so that “even when the reign is changing, the institution remains stable”.

Pavin Chachavalpongpun, an associate professor at Kyoto University’s Centre for Southeast Asian Studies, said Germany’s scrutiny of the king will affect bilateral relations and that if a coup or violence against the protesters were to occur, the European Union, with Germany now occupying the presidency, would impose sanctions on Thailand like it did after the 2014 coup that saw Prayuth , who was then the army chief, take power from the elected government of Yingluck Shinawatra.

“Thailand will throw a tantrum” if sanctions are imposed, said Pavin, who became a refugee in 2014 before the government forbade Thais to have any online interaction with him in 2017. “Thailand will demand non-interference in domestic politics from Germany. But Germany will do what it has to do.”

According to Patrick Jory, a senior lecturer in Southeast Asian history at the University of Queensland who spent almost a decade researching and teaching at Thailand’s Walailak University, there would be very little Thailand could do in response, especially through its own foreign ministry, whose main tasks include upholding the reputation of the royal family abroad.

“I think Vajiralongkorn is an embarrassment for Thailand’s foreign relations because of his appalling personal behaviour. But what can the foreign affairs officials do?” Jory asked. “They know that if they are seen to be disloyal to Vajiralongkorn they will be punished.”

Long-time observers of the Thai monarchy said there was also the possibility that it could start making secret moves to suppress the student protests, for example by mobilising a crowd of royalist supporters.

In the past week, the king, along with Queen Suthida, was seen greeting a group of yellow-clad royalists in a casual and accessible manner, an unusual move from a monarch who has been normally viewed as aloof and distant from his own people. Last Friday, the king was seen being almost pulled by Queen Suthida during a royal walkabout to a local man who had earlier held the image of the royal family in the middle of the student protests. The king placed his hand on the man’s shoulder in an act of endorsement and said while offering the man a grin, “Very brave, very good. Thank you.”

Andrew MacGregor Marshall, a Scottish journalist who focuses on Asia issues and is a long-time critic of the Thai monarchy, foresees such a clash occurring, posting on his Facebook page: “The regime will … claim that there is conflict in society among opposing groups – the democracy movement and the royalists – and that to preserve peace it is necessary to crack down on the protests calling for reform of the monarchy,” he wrote.

Marshall also noted that the king, who travelled to Ubon Ratchathani this past week with the queen, was seen to be “walking very stiffly. Sources say it is because he insists on wearing a bulletproof jacket under his uniform, and he is also facing more health problems. This is why his face is oddly discoloured.”

Other critics see in the palace’s possible manoeuvring parallels to the royal actions taken before the massacre of Thai students in 1976, when paramilitary right-wing groups shot, burned and lynched student activists at Thammasat University in Bangkok.

“The monarchy is remaining quiet publicly. But we know that prior to the 1976 Thammasat massacres, the palace was involved in activating paramilitary groups such as the Village Scouts to oppose the student movement,” said Greg Raymond, a scholar on Asean defence at Australian National University.

“Today we do not know with 100 per cent certainty, but it is possible that the palace may be manoeuvring behind the scenes with conservative forces such as the Privy Council, the security forces, both the military police and the Royal Security Command, and the Prayuth government to stimulate public opposition to the student movement,” he said.

“There are signs that government officials are trying to bring conservative Thais onto the streets to oppose the students,” he added.

Other critics found it was almost impossible to predict the king’s next move, although they feared the worst should he take action against the students.

“Vajiralongkorn is known to be headstrong, unpredictable, easy to anger, and impulsive,” said Jory, from the University of Queensland.

“He is known for his willingness to use violence against people who displease him,” he said. “So it is likely that he will be putting extreme pressure on

Tyrell Haberkorn, a professor of Asian languages and cultures at the University of Wisconsin-Madison, who wrote the book Revolution Interrupted: Farmers, Students, Law, and Violence in Northern Thailand, agreed that the current crisis is unlike any Thailand has ever seen because “citizens are asking questions that they have never before asked about the role of the monarchy in the polity and the relationship between the rulers and the ruled.”

Haberkorn said the students’ “10 demands” outline “a vision for a new Thailand. Almost all will be difficult to implement, because they call on the monarchy to be subject to the same law as the people.”

It is for this reason, Jory believes, that the king “would never agree to these reforms” because “they would take away virtually all of his power, leaving him a mere figurehead”.

“But I think that the students have done a great service to democratic debate in Thailand about the future of the Thai monarchy by making these demands public,” Jory said. “Also, the Thai royalists need to realise that if there is no reform to the monarchy, the political crisis may become so acute that more Thais will start to wonder what is the reason for having a monarchy at all.”

That question was in the air again as Thammasat University hosted its annual conferment ceremony on Friday and Saturday, an event that usually sees the presence of Thai royalty.

King Vajiralongkorn and Queen Suthida arrived for the festivities on Friday afternoon amid tight security, while a group of yellow-shirted military personnel gathered at the university as a security force along with new graduates, who celebrated the day by taking pictures with families and friends within the campus area.

The elaborate event became a much-revered tradition during the reign of Bhumibol, who took part in it for decades. The late monarch served in a role aimed at amplifying the monarchy’s relationship with the people as he “personally” witnessed young Thais’ rite of passage and the intellectual climate at higher-education institutions.

Thai news outlet ThaiPBS reported that about 9,600 graduates at Thammasat were eligible to attend this year. However, nearly half skipped the rehearsal, which means they can no longer take part.

Last year, only about 10 per cent of eligible graduates did not attend the ceremony.

A graduates’ group launched the boycott campaign because “the ceremony provides an opportunity for the monarchy to exhibit its power, contradicting democracy that values equality between king, people and bureaucrats,” they said on Facebook.

“Family, teachers and friends are part of the graduates’ success, not the monarchy,” the group said, and so the monarchy “should not use the day to justify itself”.