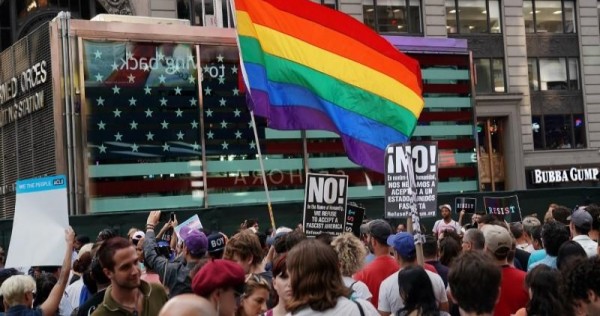 As a transgender woman living in Russia, where LGBT+ people often face abuse and state repression, Chloe Golovleva said she felt like an animal trapped in a cage.

“There was no life for me,” she told the Thomson Reuters Foundation.

Two years ago, Golovleva left Russia and sought asylum in Argentina where trans people have greater legal protections, but she still felt her co-workers did not accept her.

“It’s very difficult to start a new life,” the 40-year-old said. “There’s transphobia and homophobia, just like everywhere else in the world.”

Golovleva’s experience is common across the Americas, where conservative social norms often leave trans people locked out of formal work and pushed to the margins of society.

But increasingly, LGBT+ advocates and tech entrepreneurs are teaming up to offer training and employment in one of the world’s fastest growing industries: Information technology.

With relatively well-paid jobs, a disruptive attitude toward traditional work environments and an emphasis on innovation, advocates say the tech industry offers opportunities for trans people often left out in the cold.

“There’s a lot of trans folks… who are working in the tech space and who are also leveraging their access to resources to help other trans folks,” said US tech entrepreneur and academic Kortney Ziegler.

Because the industry “is focused on innovation and the next big thing, there’s a lot of room for people of all identities,” Ziegler said.

In countries such as the United States, Brazil and Argentina, LGBT+ rights have become increasingly accepted in recent years, despite resistance from conservative groups.

In June, the US Supreme Court ruled that workers could not be discriminated against for being LGBT+, while Brazil’s highest court made homophobia and transphobia a crime last year.

Argentina established a quota system in September under which at least 1 per cent of public sector jobs are reserved for trans workers.

Despite these strides, trans people are often left out of the workforce.

In the United States, 16 per cent of trans people reported losing a job due to their gender identity, according to the National Centre for Transgender Equality, a non-profit, while in Brazil, some 90 per cent of trans women work in prostitution.

But in the tech industry, often centered in liberal, LGBT+-friendly urban centres like San Francisco in the United States or Buenos Aires in Argentina, acceptance of gay and trans people tends to be higher, experts say.

“The representation in tech is genuinely higher than it is in a lot of more old-school industries,” said Vivienne Ming, a US-based researcher and tech entrepreneur.

According to Ming’s research, nearly 7 per cent of people in the US tech industry identify as LGBT+, compared with about 4 per cent of Americans overall, according to polling firm Gallup.

Despite the greater openness, trans people may face discrimination in the industry, especially in the recruitment process, Ming said.

As a result, many trans people in tech have taken it upon themselves to make the industry more inclusive.

Ziegler had a doctorate degree and was living near San Francisco, but as a Black trans man struggled to find work.

So in 2013, Ziegler founded Trans*H4CK, an organisation to provide training and support for trans and nonbinary people, meaning those that don’t identify as male or female, in the tech industry.

“I was inspired by this space of innovation, this idea of folks of different backgrounds and skills coming together to build something that’s tangible and usable and can save lives.”

In its three years of operation, the organisation said it helped more than 100 transgender developers to create mobile apps for other trans people to find work, health care and friends.

Ziegler admits the industry has a long way to go toward trans inclusion, and research from Trans*H4CK suggests trans tech workers often are paid less than are their non-transgender peers.

But Ziegler said Trans*H4CK’s impact has been long lasting.

“In our existence we birthed so many different organisations focused on trans folks,” he said. “So many different ideas and platforms that are still in operation to this day have come out of that.”

“I wanted to create a program that was really powered by the community,” Ross said on a recent Facebook live.

“I wanted to make sure that folks had access to community, to mentorship, to resources, job opportunities.”

In Brazil, Noah Scheffel runs EducaTRANSforma, an organisation which provides training for trans people as well as inclusion training for potential employers in the tech industry.

The organisation began in 2019 with 16 students taking in-person classes, although with the coronavirus pandemic shutting down much of the country, Scheffel moved courses online and hopes to train 200 trans people by August next year.

“(My dream) is to give them an opportunity that they’ve never had in their lives,” Scheffel said via WhatsApp message.

According to Coletti, jobs in tech do not necessarily require formal education, so trans people with few prospects can quickly learn the skills they need.

Among the trans people employed by Trans-TI is Russian refugee Golovleva, who started working at the organization in March.

It’s been a steep learning curve, she said, but after two years in Argentina, she said she finally feels at home.

“I have formal work, and in this job, there’s no transphobia,” she said. “In that sense, I’m happy.”