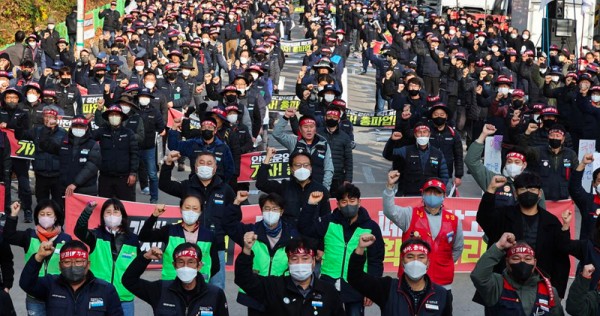 South Korean President Yoon Suk-yeol is facing heavy criticism for his unprecedented use of an administrative order that forces truckers to end a strike, with some observers comparing his hard-line crackdown to the leadership styles of past authoritarian presidents.

Seoul subway workers on Wednesday (Nov 30) joined the wide-ranging walkout, launching their first strike in six years after negotiations with management over redundancies collapsed. Train operations were consequently cut by 30 per cent during off-peak hours.

Yoon, a former prosecutor general who left a three-decade legal career to enter politics last year, said on Tuesday the government had to firmly establish “the rule of law” to manage the strike.

“[Some people] may think it would be convenient to compromise, but it would only lead to another illegal strike. In order to settle labour-management issues peacefully, the rule of law must be firmly established, no matter how hard it would be to do so,” Yoon said.

He vowed to resort to “all means possible” to end the industrial action, prompting speculation he might mobilise police despite fears of clashes with striking truckers.

Yoon, who is struggling with low popularity ratings, made the statement as his government ordered workers to end their walkout under threat of their licences being cancelled. They could also face fines of up to 30 million won or three years in prison.

Yoon’s administration is the first in South Korea’s history to issue an order forcing striking workers back to their jobs since the tool was legally introduced in 2004 following massive strikes by truckers.

However, it had never been invoked because forcing people to work represents a breach of the constitution and international norms and there is no clear legal definition of the right conditions that grant the government rights to resort to such an order.

Park Yong-cheol, head of the Korea Labour and Society Institute, said the Yoon government’s way of handling striking workers evoked the era of past authoritarian governments.

“The Yoon government is leaning toward a pro-management, no-nonsense labour policy that is similar to those of the past military-backed regime,” Park told This Week in Asia.

On Wednesday, workers defied the return to work order. Neither the government nor the striking truckers have set a date for further negotiations, as the two sides remain at odds.

Strike organiser Cargo Truckers Solidarity Union (CTSU) berated the start-work order as being in effect a “martial law that opens the door for dictatorship”.

CTSU vowed to take legal action to nullify the order.

The union held rallies nationwide on Tuesday, with many shaving their heads to show their resolve to defy the order.

The back-to-work order was issued first for cement truck drivers whose walkout caused concrete-laying to halt at 508 building sites nationwide, or about half of all construction sites, the government said.

About 1,000 of roughly 2,500 bulk cement truck firms are unionised, but the industry had reportedly delivered just a tenth of the usual daily shipments needed for the peak construction season from September to early December.

Some non-union truckers also halted deliveries, the union said, adding thousands of truckers who are not in the cement industry are also on strike.

About 9,600 people rallied during the first day of the strike, and the union said about 25,000 drivers are estimated to be striking overall, including many who are not in the cement industry.

The work action has also affected fuel supplies, with about two dozen petrol stations reportedly running dry as deliveries could not be made.

At the centre of the dispute is the extension of a minimum wage system credited with enhancing workers’ safety.

With profits somewhat guaranteed under the “safety wage system” introduced three years earlier under the previous Moon Jae-in liberal government, workers do not need to work long hours or overload their vehicles for extra income.

The current conservative government says it is willing to expand this system, which is due to expire at the end of this year, but only for shipping container and bulk cement trailer workers, for another three years.

But the union says it should be permanent and wider in scope, including those driving oil and chemical tankers, steel and automobile carriers as well as package delivery trucks.

Lee Jong-sun, deputy head of the Institute for Research on Labour and Employment of the Korea University, said the labour dispute comes amid growing scepticism among workers over the government’s sincerity for dialogue.

“The tenet of the country’s labour policy under the Yoon government has changed drastically, resorting to tough responses to workers’ strikes,” Lee said.

Unions were shocked at the appointment of an uncompromising right-wing politician widely seen as anti-union as the head of a government-management-labour tripartite dialogue committee this year, he said.

Lee said the government’s hard-line approach to labour strikes could be a tactic to appeal to its supporters at a time when Yoon has low approval ratings because of his presumed underperformance and habitual gaffes.

“It is quite sad that the government is still resorting to an anachronistic, set-in-stone labour policy, at a time when the people are still suffering from the traumatic tragedy of Itaewon,” he said in reference to the crowd crush that killed more than 150 people in Seoul shortly before Halloween.