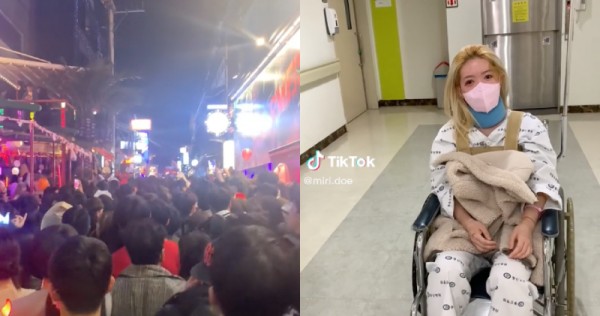 It was supposed to be a night of partying for Miri Doe and her friends.

However, things quickly turned south when she got swept away in the deadly Itaewon crowd crush which claimed 158 lives in October.

While the Korean Australian miraculously survived, the incident scarred her both physically and emotionally.

In a series of TikTok videos posted on Nov 5 and 6, Doe detailed how the horrific incident unfolded that night.

She and her friends had gone to two clubs at Itaewon before deciding to call it a night as the crowd was “getting quite crazy”.

“I saw a lot of fights and someone tried to pick a fight with me,” Doe recounted.

‘Stepped on my head’

She added that at one point, she tripped and fell, and was separated from her friends.

And while on the ground, people were stepping on her and ignoring her cries for help, she said.

“I was getting stepped on my head and my chest and the pain was unbearable,” she added.

Comparing her experience to being “swept into a sea”, Doe said it felt like she was drowning, especially since she ended up at the “very bottom of the pile of people”.

It was so bad that Doe even thought that she was dying as the pressure on her chest was “crazy” and “painful”.

She said that moments later, she blacked out. But when she regained consciousness, she said that she wasn’t able to move, and “waited silently” to be saved by the rescuers.

“Honestly, I thought I wouldn’t get rescued because when I saw glimpses of the rescuers, they couldn’t see me at all because I was so deep down. I thought I was going to die,” Doe recounted.

Thankfully, she was eventually rescued.

However, she said she sustained quite serious injuries resulting from that incident including several broken ribs, bruising around her eyes, and severe kidney and liver damage.

She added that she also got a first-degree burn on the right side of her face from being dragged on the ground during the crush.

Doe said she was hospitalised on Oct 29 and in an Instagram post today (Dec 1), she announced that she has finally been discharged after spending a month in the hospital.

But what probably hurt most was that two of her friends died in the crush.

The last time she saw them was when she fell and got swept away by the crowd.

“I really don’t know how I survived while my friends couldn’t make it that night. And I am genuinely upset and angry that I couldn’t help them, that I couldn’t protect them either,” she said emotionally.

“My friends and I, we were just at Itaewon because we just wanted a really good time and we wanted to show our friend that Halloween at Itaewon was really fun.”

Koh said he had gone to Itaewon with two friends and while trying to escape the crowd, he was separated from them.

Sandwiched between the throngs of people, he soon found it hard to breathe.

Thankfully, he spotted a ledge and managed to climb onto it to escape from the crowd.

“I was the last one to get out. Both my friends were not hurt. I suffered some cuts, but it was nothing compared to those who fainted or even got stepped on.

“I can’t imagine what would have happened if we had continued staying there. We could have died,” he said.