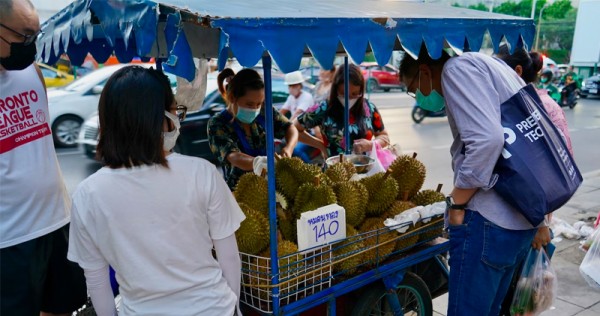 Thailand has insisted that durians it exports to China are of premium quality after a viral video appeared to show substandard spiky fruit from the kingdom being sold on a roadside in Shanghai.

The agricultural ministry urged Chinese authorities to launch a probe into the YouTube clip in which a Thai woman last week asked a vendor if the durians originated from Thailand and the seller answered in the affirmative.

Alongkorn Ponlaboot, counsellor to agriculture minister Chalermchai Sri-on, said his boss became aware of the incident after seeing the video on Thai media.

“Once he learned of the clip, the minister instructed the agricultural attaches in Beijing, Shanghai and Guangzhou to investigate the matter,” Alongkorn told the Nation news website.

Alongkorn also said an agricultural officer from the Thai consulate in Shanghai inspected the spot but did not find durians being sold there. He added that further investigation revealed the woman bought the smelly fruit from a mobile vendor whose produce often does not meet quality standards.

He called on customers to check certified stickers affixed on the fruits to verify their origin, adding durians sold in shops are subject to quality control.

Alongkorn also directed Thai officials to ensure that no unripe, Covid-contaminated and substandard durians made their way to China.

With its creamy custard-like flesh and powerful odour, the pungent-smelling fruit has surged in popularity in the world’s second-largest economy. Thailand, the world’s largest durian grower, exported more than 875,000 tonnes of the fruit to China last year.

In 2021, Thai authorities arrested a middleman who imported Vietnamese durians and labelled them as Thai products before exporting them to China.

Beijing and Hanoi signed an agreement in July to allow Vietnam’s fresh durian to be exported to the Chinese market in the near future following nearly four years of negotiations.