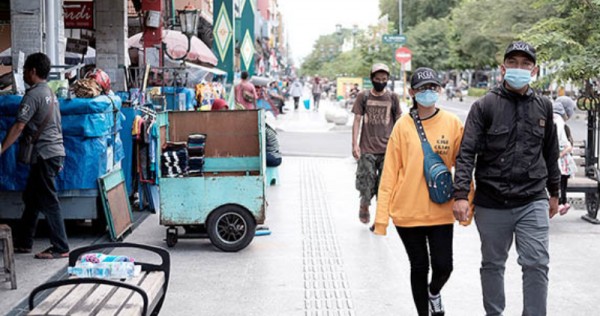 Amid the still alarming pandemic, Yogyakarta reportedly welcomed 1.67 million tourists between July and November, according to data from two mobile apps published by the local administration: Visiting Jogja and Jogja Pass.

Based on the data, Yogyakarta Sultan Hamengkubuwono X, who is also Yogyakarta’s governor, was certain that the province’s tourist industry would recover quickly.

Hamengkubuwono said during a virtual meeting with the Tourism and Creative Economy Ministry on Thursday that the pandemic had impacted tourism and education in Yogyakarta, causing enormous economic losses.

He said the province’s economy was experiencing a contraction, dropping 0.16 per cent year-on-year in the first quarter of 2020 and 6.7 per cent in the second quarter.

Meanwhile, in the third quarter, the contraction was 2.84 per cent year-on-year.

“We hope Yogyakarta’s economy will not be negative at the end of this year,” said Hamengkubuwono, as quoted by tempo.co.

However, Hamengkubuwono admitted that it was not easy to restore tourism and economic activity in general during the pandemic, saying the local administration and community’s commitment to behavioural changes during the so-called new normal period was key to containing the spread of the coronavirus.

Hamengkubuwono said the local administration had urged Yogyakarta’s tourist stakeholders to issue their own protocols related to health and safety.

“The Yogyakarta administration has never issued a regulation to close tourist attractions, hotels or restaurants,” he said, adding that, as the governor, he only made one regulation about health and safety protocols.

Yogyakarta is among numerous provinces that reopened tourism in mid-2020.

In July, the governor decided to partially reopen the province’s tourist sector and let tourist destinations operate with a limited number of visitors, as he feared a full reopening would be too risky for Yogyakarta.

With regard to a recovery in tourism, Hamengkubuwono said he did not want the community to suffer under local administration regulations.

“We encourage the associations to become the subject and regulate technical matters,” he said.

Tourism in Yogyakarta is going through a challenging time. In addition to the Covid-19 outbreak, Mount Merapi in Magelang, Central Java, has spewed lava in a sign of increased volcanic activity over the past week, according to the Geological Disaster Technology Research and Development Centre.

He went on to say that many jeep drivers had begun farming or breeding to make ends meet.

In September, tourism businesspeople in Yogyakarta had demanded that the government establish clear and consistent regulations regarding tourist visits to the area, as the pandemic had pushed down the number of visitors.