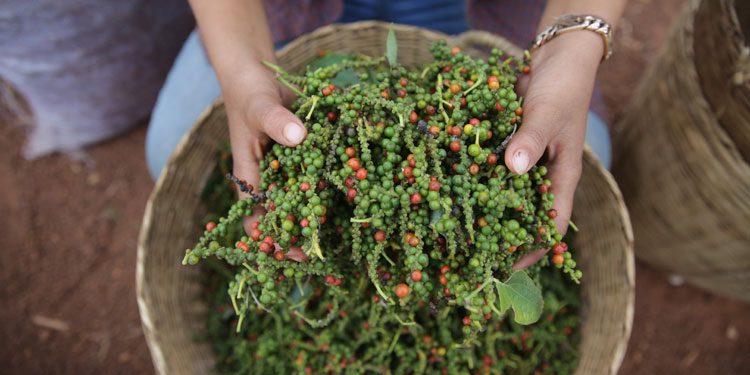 The Czech-owned, EU Land and Pepper Investment Co handed over 10 vacuum-packing machines during a ceremony over the weekend in Angkor Chey Village, Kampong Trach, Kampot province.

The machines manufactured in the Czech Republic were formally handed over as a part of the company’s Pepper Field project commitment during a ceremony witnessed by Pan Sorasak, from the Ministry of Commerce (MoC), Cheav Tay, governor of Kampot province and Stepan Vojnar, Charge d´Affaires a.i. of the embassy of the Czech Republic.

Besides ongoing plans to buy exclusively from small-scale farmers, the company has introduced additional ways to promote and market Kampot pepper, including freeze-drying the fresh green pepper and setting up digital communication and marketing channels.

As in the case of a previous shipment of technologies by the company delivered last February, this acquisition of food processing equipment for local, small farmers was supported by the Czech Development Agency. In order to achieve the projects’ targets, the Czech company will work closely with the Kampot Pepper Promotion Association (KPPA).

During the ceremony, the Czech company also announced it had amassed $40,000 via fundraising efforts in the Czech Republic for a food bank project designed to assist families of pepper farmers in Kampot affected by COVID-19.

With the new technology, the company hopes small-scale farmers will be able to process around 10 tonnes of pepper to market by 2021.

David Pavel, Pepper Field project founder and CEO of the EU Land and Pepper Investment, has set his sights on the company attaining 100 percent fair-trade status.

“We make sure all income stays with each farmer. As far as I am aware, there [is no other] company [yet] buying Kampot pepper exclusively under strict fair-trade conditions,” Pavel said.

In the Czech Republic, the company is a member of the Association of Social Responsibility, which aims to promote and meet Sustainable Development Goals (SDGs).

In order to boost its business plans in Cambodia, the company has embraced a number of innovations. Besides the promotion of online sales, it has also acquired technology to freeze dry Kampot pepper.

This technology will preserve the peppers’ hand-picked aroma as it reaches customers in Europe. The company is also discussing a close cooperation with the KPPA in setting up digital communication channels that will contribute to raising awareness about Kampot pepper worldwide.