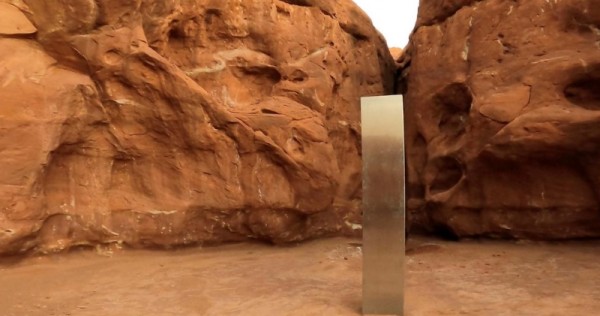 No word as to whether Star Trek’s Scotty “beamed it up,” but the mysterious, shiny monolith that was spotted in a remote southeastern Utah desert two weeks ago is gone.

A state crew that buzzed through the wilderness, counting bighorn sheep from a helicopter, found the alien-looking object on Nov. 18 and touched off international sci-fi speculation, harkening to the classic Stanley Kubrick 1968 film, “2001: A Space Odyssey.”

In the Kubrick movie, an alien monolith is a recurring symbol that appears to play a role in the development of human evolution.

The riddle in the desert, twice as tall as an average adult, drew scores of the curious to see it, even though its exact location was not made public, according to accounts on social media.

No one seems to know where it went.

Neither the federal Bureau of Land Management nor the state’s Department of Public Safety said they had any idea.

“We have received reports that the illegally installed structure, referred to as the ‘monolith’ has been removed from Bureau of Land Management public lands by an unknown party,” the state agency posted on Saturday (Nov 28) on its website.

It said the object was reportedly removed on Friday evening. A representative was not immediately available for comment on Sunday (Nov 29).

Guesses as to what happened ran wild online, with one person postulating, “The space aliens returned to remove it.”

The art world has speculated that the object was the work of John McCracken, a sculptor fond who died in 2011.

His son, Patrick McCracken, has told The New York Times his father told him in 2002 that “he would like to leave his artwork in remote places to be discovered later.”