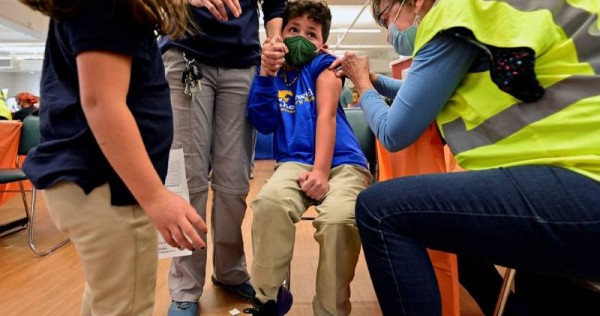 A panel of advisers to the US Food and Drug Administration on Wednesday (June 15) unanimously voted to recommend Moderna Inc’s Covid-19 vaccine for children under six years old and Pfizer Inc and BioNTech SE’s for children under five.

The following are some important details to know about these two messenger RNA (mRNA) vaccines for this age group.

How many doses are needed?

Moderna has asked the FDA to authorise a two-dose regimen of its vaccine in children aged six months to six years old. The 25-microgram doses are given 28 days apart. Adults received 100 micrograms per shot for their the first two doses.

Pfizer and BioNTech are asking for a three-dose course of their vaccine for children aged six months to under five years old.

The first two doses are given 21 days apart and the third is administered at least two months after the second. Each dose is three micrograms, below the 10 micrograms given to children aged five to 11 and 30 micrograms for people aged 12 and older.

Both companies sought lower-dose versions for younger children to try to reduce vaccine side effects.

How effective are the vaccines?

It is not yet known how effective the Pfizer/BioNTech vaccine is at preventing infection in people under age five because of the low number of symptomatic Covid-19 cases among the children in its trial.

Both the company’s trials showed that the vaccines generated a similar immune response to those seen in older age groups.

Are the vaccines safe for children?

Neither vaccine has raised any serious safety issues in the trials.

Heart inflammation known as myocarditis and pericarditis has been found to be a rare side effect of the vaccines in young men, but there have been few cases reported in the US in children ages five to 11, and none in either of these trials for the youngest age group.

What are the side effects?

Some children reported pain and swelling at the injection site after vaccination from both vaccines.

Pfizer’s low-dose vaccine was generally better tolerated, with only sightly more participants who received the vaccine complaining of fevers, irritability or fatigue when compared with those who received a placebo.

In ages two to four, 33.7 per cent of participants who received their second dose of the vaccine reported one of these side effects, compared to 32.2 per cent who received placebo.

For Moderna’s vaccine, 58.9 per cent of three to five year olds reported some type of reaction like fever, headache or fatigue after receiving their second dose, compared with 37.2 per cent of participants who received placebo.

Covid-19 is generally milder in children than adults, but there have been more than 440 US Covid-19 deaths among those under age five, according to FDA officials.

Data has shown that in older children and adults, vaccines protect against hospitalisation and death, according to Dr. Matthew Harris, a pediatric emergency medicine physician at Northwell Health in New York.

People who had a Covid-19 infection and received a booster shot had the most protection against Covid-19, he said.