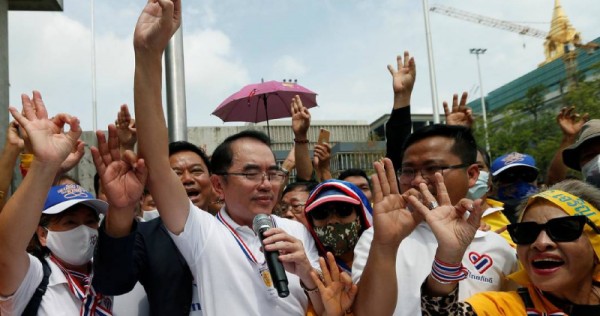 BANGKOK – Hundreds of Thai royalists marched to parliament on Wednesday to oppose calls from anti-government protesters for changes to the constitution as the assembly met to consider amending it.

The special session of parliament was convened after nearly two months of protests – the biggest of which drew tens of thousands of people at the weekend in the Southeast Asian country.

Protesters seek to change a constitution they say was engineered to ensure former junta leader Prayuth Chan-ocha stayed on as prime minister after last year’s election.

They want his departure and some protesters also say the constitution gives too much power to King Maha Vajiralongkorn.

The 2017 constitution was written by a military-appointed committee and passed a nationwide referendum in 2016 at which opposition campaigning was banned. Prayuth said the 2019 election was fair.

Warong Dechgitvigrom, who led the march to parliament by the royalist Thai Pakdee group, said he had submitted a petition with 130,000 signatures opposing constitutional change.

“To amend the 2017 constitution, another nationwide referendum must be done,” Warong told Reuters. “Nothing good would come out of this amendment. It will only benefit politicians.”

The group’s move came after Thai legal watchdog group iLaw submitted a charter draft to parliament on Tuesday ahead of Wednesday’s consideration.

But the parliament secretary said that draft, backed by over 100,000 signatures, would not be considered this week because the signatures must be verified first.

Parliament will decide on Thursday how and what part of the constitution will be amended. Protesters plan to rally outside the parliament to apply pressure.

Parliament is made up of an elected lower House of Representatives, in which Prayuth’s backers increased their majority after a ban on a major opposition party early this year.

Members of the Senate, parliament’s upper house, were all selected by Prayuth’s former junta.