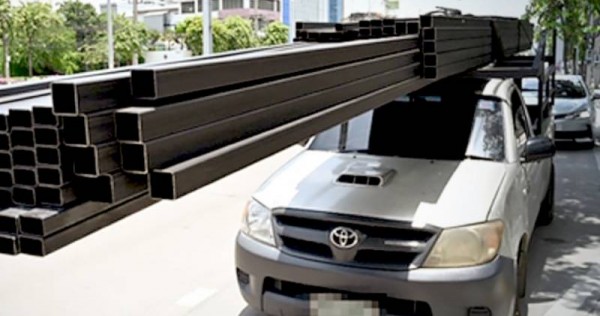 Two motorists narrowly escaped death when their cars were impaled by 6-metre long square pipes that had slid off a pick-up truck in Bangkok’s Bang Kho Laem district on Monday (Aug 18).

Watprayakrai Police Station was notified of the accident, which to bystanders looked like a scene from a horror movie.

Atchathorn Khamraksa, 25, told police that he was driving at 80 kilometres per hour when the car in front of him stopped suddenly forcing him to brake, which resulted in the pickup behind him to hit his car.

When he looked back, he saw that a pipe had broken through his rear window and had stopped just short of impaling the driver’s seat.

The driver of the car in front of him, Pattaranit Thammasitsophon, 61, said she had stopped suddenly to avoid an object that was dropped from another car only to find her car had been speared by a pipe as well.

The pickup’s driver Watchara Manosri, 26, said the impact of braking suddenly had loosened the pipes that he insisted were strapped tightly.

He was charged with reckless driving causing damages and transporting objects in a dangerous manner.