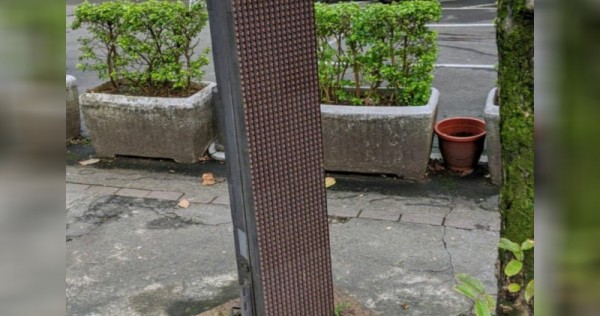 Since the recent discovery of a monolith structure in Utah’s Red Rock Desert, many social media users have pointed out similar structures in various places around the world, leading many to question whether it’s a marketing gimmick or a message from outer space.

These monoliths soon became popular photography destinations for social media influencers. One structure, with some Taiwanese characteristics, was even spotted in Taipei.

A Reddit user recently shared a photo of a huge rectangular block standing in the middle of the sidewalk, dubbing it “The Taipei Monolith.”

However, upon closer inspection, the tall block was clearly an LED road sign that signalled the road conditions ahead.

Many got the joke and one commented below: “Ah, the fabled LED array; really captures the Taipei ambience.”

Another feigned ignorance and questioned: “Where did it come from? Who put it there? Can’t find the answers, so it must be aliens.”

One social media user gave a “scholarly” answer, concluding that the monolith is “definitely primitive” and suspected it came from the “late neolithic.”

Others simply captioned it “ROC aesthetic”, seemingly insinuating that it can be found in many places in Taiwan.