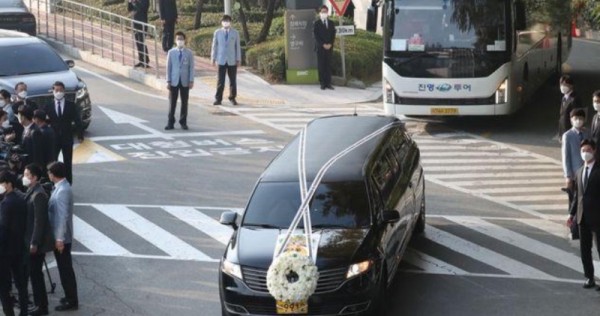 SEOUL  – South Korea said on Thursday it had alerted about 1,000 people who attended the memorial of the late Samsung Group patriarch Lee Kun-hee last week to get tested for the coronavirus after one person at the event tested positive.

A local journalist who had covered the memorial developed symptoms two days later and tested positive on Monday, health authorities said. At least six new coronavirus cases, including two colleagues and two family members had been linked to the journalist, the authorities said.

Kwak Jin, an official at the Korea Disease Control and Prevention Agency (KDCA), told a briefing that no cases had yet been directly linked to the funeral home at the Samsung Medical Centre, including that of the journalist, who wore a mask during the event.

Some of the visitors who had already tested negative for the virus after the memorial included a deputy national security advisor Kim Hyun-chong and the Jeju governor Won Hee-ryong, according to the presidential Blue House and the Jeju city.

South Korea has used aggressive testing and contact tracing in a bid to contain the virus and was lauded as a success story in the beginning of the pandemic, but has been fighting daily cases that have hovered around 100 over the past week.

People attended the memorial over four days to pay their respects in an area capped for 50 people, while visitors also wore masks as required in public places to control the spread of Covid-19.

South Korea reported 125 new coronavirus cases as of Wednesday midnight, bringing the total number of infections to 27,050, and the Covid-19 death toll to 475.