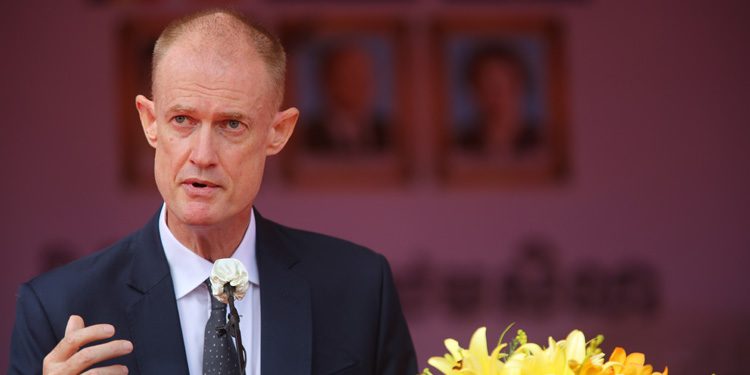 The nation’s electricity demand has sustained robust growth over the past decade but more will be needed as communities and the population grow and PV power yields significant economic benefits over conventional power sources.

The United Nations Development Programme (UNDP) Cambodia’s resident representative, Nick Beresford, said yesterday solar technology is moving fast, is far cheaper than carbon-based energy and provides clean electricity. He said the UNDP is working with the Ministry of Mines and Energy on projects to ensure the country  fully benefits from this relatively new, sustainably sound technology.

“There are 237 villages off the national grid classified as hard to reach. The UNDP, together with the ministry, is helping provide good quality energy to them using direct current [DC)] mini-grids,” said Beresford.

He added it’s cheaper and makes energy supplies more reliable. “We are at the pilot stage now and we hope to see DC mini-grids rolled out for all off-grid villages.”

Beresford said solar-powered water pumps are a great low-cost option for farmers because they are easy to move and can significantly increase yield. The UNDP together with the Ministry of Mines and Energy and South Korea is helping to extend their use and build up local service centres.

Cambodia is particularly well-suited for solar energy because it receives good quality sunlight in areas of high energy demand. Reform of rooftop solar energy regulations has the potential to better exploit this opportunity and is another area being worked on.

The UN organisation is currently working with the government on an economic appraisal of the potential of  PV energy. “This research is clearly showing higher potential economic growth and better social outcomes that come with further investments in solar and other renewable energy. We hope to see the report released this year,” said Beresford.

He added the government is making significant investments to improve the stability of the grid which will allow a more decentralised, more stable and efficient energy system.

There are some major connected opportunities in new digital energy technology. For example, supervisory control and data acquisition, energy management systems and demand-side management would allow Cambodia to improve grid management and control. That makes it much easier to build in more solar power.

Cambodia has some of the most robust solar energy resources in the ASEAN region. In three years, it went from testing a 10 megawatt (mW) pilot project to commissioning a total of 265 mWs at year’s end. Soon, 450 mW of solar power will be connected to the national grid, tentatively by the end of this year.

Amru Rice will pilot the use of solar energy in its warehouses, becoming the first rice miller to be equipped with solar energy systems.

The piloting of this solar energy system will be conducted soon a an Amru rice mill located in Kampong Thom province.

It is installed on the roof of the paddy warehouse and expected to serve more than 10 hectares with a capacity of 262 kilowatts peak, according to Kann Kunthy, vice-president of Amru Rice (Cambodia) Co. The  piloting of the system will be carried out through a build-operate-transfer (BOT) project between Amru Rice and Total Co.

It will be installed in synchronism with state electricity with permission from Electricity of Cambodia. Kan Kunthy said the use of solar energy will help boost the rice sector in terms of production costs, such as less time spent milling and drying rice and help push the production line to meet market demand.

Amru Rice President Song Saran said the installation of solar-sourced energy in the paddy warehouse and processing production aligns with moves to a greener economy. He added it also helps meet the seventh goal of the Sustainable Development Goals (SDGs) in 2030 to provide affordable and environmentally friendly energy.

Thailand has the highest total potential PV in the region of 10,538 gigawatts (gW) according to the National Renewable Energy Laboratory (NREL) in its 2019 report.

The NREL estimates Cambodia has the third-highest resources in the ASEAN region, with  3,198 gW of total PV potential. Cambodia is expected to have 0.445 gW of installed PV capacity by 2022, amounting to just 0.014 percent of its potential.

MME’s spokesman and Director-General of its General Department of Energy Victor Jona said Cambodia will have 465 mW of solar power connected to the national grid in 2022 – about 15 percent of clean energy among total sources in the Kingdom.

He said to have secure and stable energy in the country, the government is considering developing a mixed energy approach. This could be from hydropower dams, solar and wind power, with some from coal power plants.

“We cannot solely consider clean energy because it is not stable. Clean energy depends on its origin and the season. Some sources of power are able to generate power in the rainy season while some can generate it only in the dry season. Therefore, we have to develop a mixed energy source to ensure its security,” Jona stressed.