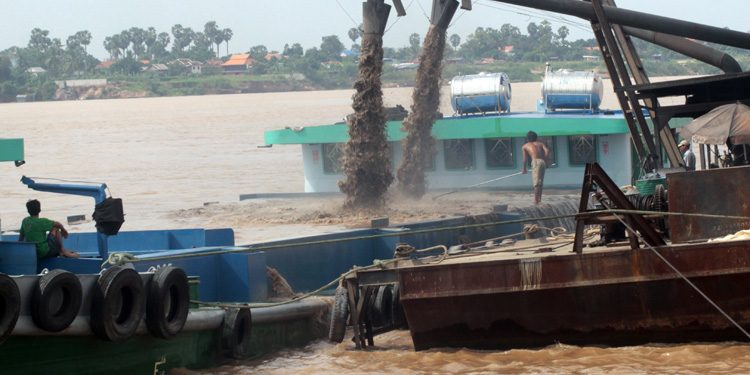 The Ministry of Mines and Energy has called for bids for sand mining in Cambodia licences across 2,000 hectares in Koh Kong and Preah Sihanouk provinces.

Sand mining in Cambodia is conducted mainly at open pits, beaches, inland dunes or from the dredging of ocean and river beds.

Sand is mined primarily to produce concrete for use in construction but this little-noticed and largely unregulated activity has serious costs  because it damages rivers and wreaks havoc on coastal ecosystems and has even wiped  away entire islands.

The growing demand for sand is driven by rapid urbanisation, including the ongoing building boom in Cambodia. and global population growth.

According to the report, Understanding the Implications of Sand Mining: A Livelihoods Analysis in Coastal Cambodia, the Kingdom is among the largest exporters of sand worldwide with sand-mining operations first beginning in 2007. It has continued to grow as an industry.

Large-scale mining operations first began in Koh Kong province in 2008, and it quickly became the epicentre for sand mining in Cambodia.

Most operations began in the estuarine systems in western Koh Kong and the sea off the coast of southern Cambodia. Sand was then exported to Singapore for use in construction and land reclamation.

Throughout 2009 and 2010, sand mining would expand along Cambodia’s coastline. In October 2009, 14 companies were given concessions in Koh Kong, Preah Sihanouk and Kampot provinces.

Spokesman for the Ministry of Mines and Energy Meng Saktheara said the government had suspended all sand export licences in that province after re-evaluating the environmental and social impact on river systems.

He said the ministry worked with civil organisations to assess sand mining in Koh Kong and found the province could not support large-scale dredging.

San Chey, executive director of the Affiliated Network for Social Accountability, previously said sand dredging is an issue that affects villagers and the environment.

“Sand dredging impacts villagers when banks collapse. In my opinion, it is not necessary to do it now,” San said.

He noted operators tend to neglect technical aspects and only focus on benefits.

Critics also say it can result in increased flooding which causes a severe threat to biodiversity, said Brian Eyler, a Southeast Asia expert at the Stimson Center think tank and the author of Last Days of the Mighty Mekong. “When you extract all the sediment from its beds, the river looks for new sediment, so it pulls the banks into the river and this ultimately has resulted in numerous roads collapsing into the river and lines of homes and towns falling into the river.”

Sand is by far the single most mined commodity.