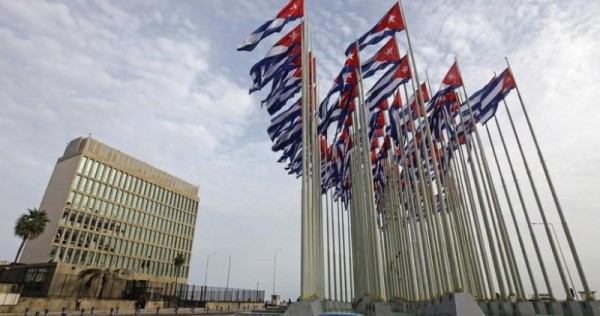 A report commissioned by the US State Department has concluded that “directed, pulse radio frequency energies” were the most likely cause of a mysterious illness that has plagued US diplomats in China and Cuba.

The condition, which was first reported by embassy staff in the Cuban capital in 2016, has prompted some US diplomats to accuse the US authorities of covering up the incident, while one of those affected in China has said he is convinced he was the victim of a targeted attack.

The report, released earlier this month by the National Academies of Sciences, Engineering and Medicine, studied the cases of eight US and Canadian diplomatic staff suffering from the as-yet-unidentified “Havana Syndrome”.

Sufferers said symptoms started with the onset of a loud clicking noise which persisted even when they covered their ears. They then began to feel pain and pressure in the ears, dizziness and disorientation. Longer term symptoms included memory loss and anxiety.

The report found that the symptoms described by patients were “most consistent with a directed radio frequency energy attack”.

It noted that the symptoms were lessened when patients moved into separate rooms, or hid behind solid walls, suggesting that the bouts of illness “were caused by some physical force that could penetrate windows but not walls”.

It ruled out the possibility that the symptoms were the result of “mass hysteria”, chemical exposure or infectious diseases like the Zika virus, as had previously been suggested.

Although the report strongly suggests the syndrome was man-made, it does not offer any explanation as to who could be responsible.

“Havana Syndrome” has baffled sufferers and officials since reports of it first emerged in 2016.

The following year two dozen staff at the US Embassy in Cuba reported symptoms along with a number of Canadian diplomats. The same year an unknown number of staff at the US consulate in Guangzhou came down with a similar unexplained illness.

The onset of the illness in Guangzhou eventually led to the medical evacuation of several consulate staff back to the US.

Various former diplomatic staff members have accused the US authorities of being reluctant to investigate the cases in China. Some of them also said there was a deliberate cover-up to avoid political repercussions.

The new report, whose compilers said they did not have full access to information about the cases in China, offers few answers.

Mark Lenzi, a former diplomatic security officer and staffer at the Guangzhou consulate, told The New York Times in October that he was convinced that the US government had deliberately covered up the truth about the illness in China.

Lenzi and his wife started hearing loud noises in 2017 and suffering symptoms of concussion the following year. Convinced that he was the victim of a targeted attack, he wrote to his colleagues to warn them, for which he was officially reprimanded.

Months later, in June, Lenzi was evacuated with other consulate staff to Pennsylvania. According to the report, he later sued the Department of State for disability discrimination in their handling of his complaints.

However, the latest report said that although the immediate symptoms reported by staff in Guangzhou were similar to those of embassy staff in Cuba, “the information made available to the committee on DOS [Department of State] patients in China is too sparse and fragmentary to draw any substantive conclusions”.

The report also found that sluggishness in the initial US response to the mystery illness made it more difficult to unearth its cause.

Chinese foreign ministry spokesperson Lu Kang said in May 2018 that the Chinese government had investigated the cases, without discovering the cause of the illness.

“China has conducted a very careful investigation and has given preliminary findings to the US, and we haven’t found the reason or clues that led to the situation mentioned by the US,” Lu said at the time.

In recent months, speculation about China’s use of sonic weapons has been rife.

The US Department of State said in a statement on the latest report that certain information had been withheld for reasons of national security, but that it nonetheless welcomed the their findings. China has yet to comment since its publication.