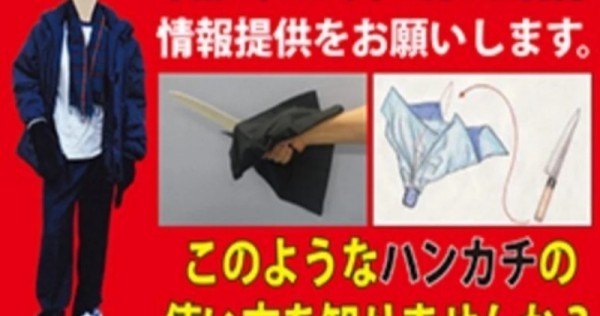 Police in western Tokyo have launched a campaign to jog the memories of anyone who may be able to shed new light on one of the most notorious unsolved crimes in modern Japanese history – the slaughter of a family 20 years ago that some people say altered the way they lead their lives.

Over the weekend, police began handing out fliers depicting an ordinary-looking family home in the Setagaya district of the city, along with an image of a person wearing dark-coloured trousers, a down jacket, gloves, a scarf, hat and distinctive trainers.

An accompanying description of the man indicates he is around 170cm tall.

The flier also includes details of the 20 million yen (US$192,288) reward for the man, the only suspect in the killing of a family of four in their house as they prepared to celebrate the arrival of New Year on Dec 31, 2000.

With violent crime a rarity in Japan and a home invasion and the killing of an entire family almost unheard of, a case that is widely known as the Setagaya murders has become infamous – in part because despite all the evidence, the police have never been able to identify or arrest the perpetrator.

“That case really shocked Japan,” said Shinichi Ishizuka, a professor of law and director of the Criminology Research Centre at Kyoto’s Ryukoku University.

“It was a combination of things that caught the attention of the public and the media, including the killings taking place on New Year’s Eve, which is meant to be a time of peace and families being together,” he told the South China Morning Post .

“In addition, it happened inside the home of the family, which should be a safe place,” he said. “The fact that two children died and then the killer stayed in the house for many hours was also difficult to comprehend.

“And, of course, despite all the evidence, no one has ever been arrested in the case,” Ishizuka added. “I think that is one of the most important elements in the story; that despite Japanese police having a very good record when it comes to serious crimes and violence like this, they have never been able to identify the killer and hold him accountable.”

Police have been able to piece together much of what befell Mikio Miyazawa, 44, his 41-year-old wife Yasuko, their daughter, Niina, 8, and 6-year-old son Rei on the evening of their deaths.

It is believed the attacker was able to enter the house through a window at around 11pm and immediately strangled Rei as he was sleeping in the first-floor bedroom.

Perhaps alerted by a sound, Mikio Miyazawa was going up the stairs when he was confronted by the attacker, stabbed and pushed back down.

Yasuko and Niina were watching television in the third-floor bedroom but had no way of escaping. In the initial confrontation, the attacker’s knife was broken so he calmly went to the kitchen and took another knife from a drawer. He then returned to the top floor of the house and repeatedly stabbed Yasuko and Niina.

Instead of taking cash or other valuables that were in the house, however, the assailant helped himself to food from the freezer, took a nap on the living room sofa and used the family computer.

Surprisingly, at no point during the time he spent in the house did he take any countermeasures to make it more difficult for police to trace him.

The authorities have found numerous fingerprints that can only have come from the attacker, he left blood from injuries that he sustained in the killings and he discarded a long-sleeved shirt and a small waist bag.

Given the amount of evidence left behind, it is surprising the attacker has not been identified.

DNA tests on the blood show the killer was of mixed race and probably not a Japanese citizen. His mother was of southern European descent, probably from around the Adriatic region, while his father was Asian. The DNA results showed a marker common in one in every five Koreans, one in every 10 Chinese and just one in 13 Japanese people.

Supporting the theory that the perpetrator is not Japanese is that the fingerprints left at the scene have not been found on any Japanese database, despite fingerprints being required for driving licences, passports and other official documents.

Another indication that he was not Japanese were his running shoes, which left bloodied footprints behind. That particular size was never sold in Japan but was available in South Korea.

Other leads the police are still working on include grains of sand found in the waist bag that could be traced to a very specific stretch of beach in southern California and a passenger in a taxi who left a bloodstain on the seat when he disembarked.

To date, 280,000 police officers across Japan have been involved in the inquiry in some way, receiving and analysing some 16,000 items of information. Yet they are still awaiting the crucial piece of evidence that cracks the case.

And now, the two-decade anniversary has stoked new fears in people.

“I remember the case; everyone does,” said Kiyoko Imamura, a housewife who lives in south Tokyo. “The way they all died was terrible, but what frightened me most was how this person managed to get into their house late at night when it should have been locked up.

“It makes me look at my own home and wonder just how easy it would be for someone to get inside if they really wanted to,” she said. “It’s frightening to think like that.”

Ishizuka shakes his head and says he fears there is little likelihood of a member of the public remembering a vital detail that could solve the case at this late stage.

“It has been too long,” he said. “The case is famous so it would have been impossible for anyone with information that might be useful to the police not to hear about it. It’s a tragedy, but I doubt that we will ever find out exactly what happened that night.”