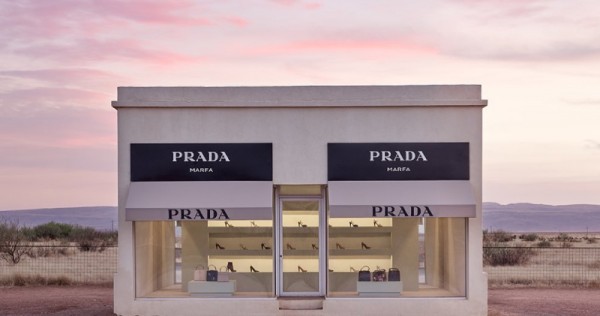 PRADA MARFA, located on the side of Highway 90, stands out in northwest Texas. Inside the window, there are rows of Prada classic bags, right-footed size-37 Prada shoes.

Except for the white facade of the store covered with a layer of sand, this store seems to be no different than other Prada stores.

PRADA MARFA is not open for business though.

PRADA MARFA was created by Danish and Norwegian artists Michael Elmgreen and Ingar Dragset in 2005 when they were struck by the loneliness of the desert landscape and wanted to create a store that would stand like a rock in the middle of the desert.

The artists teamed up with Yvonne Force Villareal and Doreen Remen, founders of the Art Production Fund in New York, to create a PRADA store in the desert at a cost of US$120,000 (S$160,100).

The artists told VOGUE: “We really wanted to see what could happen if one would make a fusion of pop and Land art. It was also meant as a comment on branding and consumerist culture.”

Beyoncé passed through the town in 2012, and shared a picture of herself jumping in front of the installation, making it a must-see destination in many people’s hearts.

But since then, Prada Marfa has become such a target for vandalism that the spirit of the artwork has changed.

Within days of its unveiling in 2005, a thief broke the windows and ran off with the loot.

For this reason, the bags were later installed with GPS trackers and their bottoms were cut out to prevent theft, a camera and an anti-theft alarm were also installed.