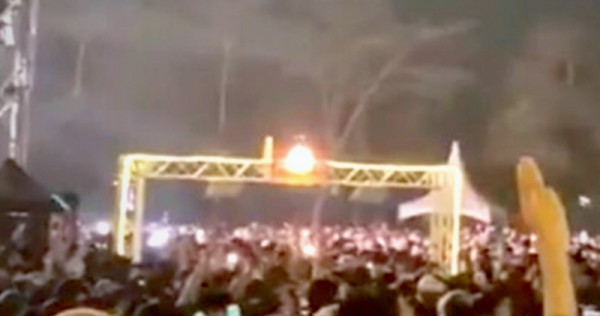 Netizens have questioned the order to shut down the weekend’s Big Mountain music festival, saying it may be linked to the government crackdown on pro-democracy activists.

Wichian Chantaranothai said organisers had failed to limit the number of festival-goers or enforce mask-wearing, leading to shouting and singing among crowds which could transmit the virus.

However, less than an hour after organisers closed the show at 10pm, social media users began sharing footage of pro-democracy content at the festival.

Pro-democracy netizens questioned whether government officials had pressured the Nakhon Ratchasima governor to shut down the event, using the Covid-19 plea as a cover.

Virus fears were sparked on Saturday when a 43-year-old Chiang Mai woman who travelled to the festival with seven friends was taken to Maharat Nakhon Ratchasima Hospital with a fever and chest infection.

Meanwhile photos of long queues and crowding at the festival on Saturday prompted some netizens to call for it to be cancelled to prevent Covid-19 transmission.

Tests on the 43-year-old woman and her seven friends came back negative for Covid-19 on Sunday, according to Disease Control Department chief Opas Karnkawinpong.

However, an inspection by health officials found crowding in front of stages at the festival and many people not wearing masks. Opas said officials asked the festival organisers to fix the problems, but there was no response.

Governor Wichian said on Sunday the decision to close the event came after organisers failed to respond with adequate virus prevention measures.

Organisers announced on Facebook they would refund the tickets of any fans who were unhappy with this year’s event.

Held at the Ocean Khao Yai Golf Club, Big Mountain has become one of Thailand’s biggest music and arts festivals over the past few years.