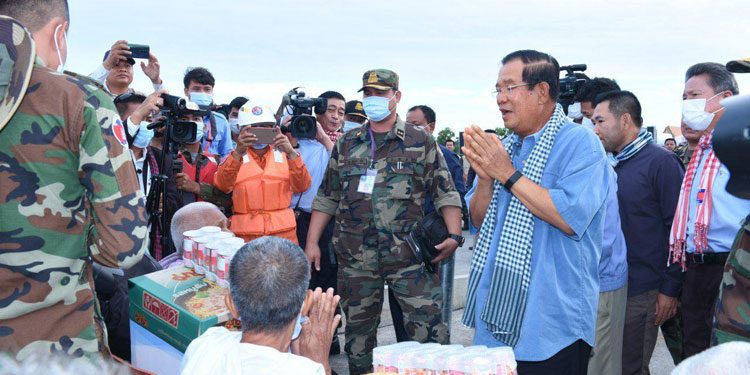 Prime Minister Hun Sen yesterday called on banks and microfinance institutions (MFIs) to understand and delay the repayment of debts of people affected by this year’s floods.

He made the call during a meeting with people affected by flooding in Banteay Meanchey province. The premier added: “Banks or microfinances must be understanding about [repayment] delays or reducing interest rates. Especially no property should be seized during the COVID-19 [pandemic] and the flooding.”

He also pushed the authorities as well as the people to participate in three main measures during this time. First, they must join combating COVID-19. Second, they should fight the flooding together. Third, everyone should try to restore and develop the previous socio-economic situation after the floods.

Mr Hun Sen also asked the National Bank of Cambodia (NBC) and the Ministry of Economy and Finance to guide banking and microfinance institutions to understand flood victims across the nation by reducing interest rates or delaying debt repayments until the challenges
are overcome.

He said, “I would like to send this message to all banks and all microfinance institutions: Please understand the difficult situation of our people. You really need to make a profit, but if the profit comes from the difficulties faced by the people, it will not be happy for all and [there will be] no win-win situation. Hopefully, all banks will do their job.”

Responding to the PM’s calls, the NBC yesterday issued a statement to ask for banks and microfinance institutions to continue to cooperate with customers in alignment with the customer protection framework and continue to provide  support as much as they can to the debtors who are affected by flooding.

The NBC has also appreciated the previous activities carried out by MFIs and banking institutions to participate in implementing the government’s measure as well as the NBC’s announcements.

Kaing Tongngy, head of Cambodia’s Microfinance Association’s (CMA’s) communications department, said the CMA members are continuing to provide loan restructuring as usual until the end of the year. “We are now discussing with members and stakeholders about the possibility of extending loan restructuring to 2021, especially in the tourism sector, which is still struggling,” Tongngy added.

Tongngy said that there is no data concerning the impact on MFI’s customers who suffered flooding because it is at an early stage, but the MFIs have an existing policy to protect customers when they experience natural hazards.

“The CMA is monitoring the impact of the flooding. If we find the natural disaster is huge, we will issue another urgent mechanism to the victims, but we have received some figures from the Ministry of Agriculture that the impact is less than last year,” he added.

According to a report of the National Committee for Disaster Management, as of Tuesday, the total number of people affected by the floods was more than 100,000 families, equivalent to more than 410,000 people.

More than 260,000 applicants received approval to restructure their loans from MFIs as of October, according to data from the CMA. It is now discussing with its members about extending loan restructuring to next year.

“For the last five weeks, only 1,000 requests were made weekly. We will continue to provide loan restructuring as usual until the end of the year,” said Tongngy, adding that there were about 280,000 requests across the country with 260,000-plus approvals. “The loan total is $1.3 billion. It is going down now,” Tongngy added.