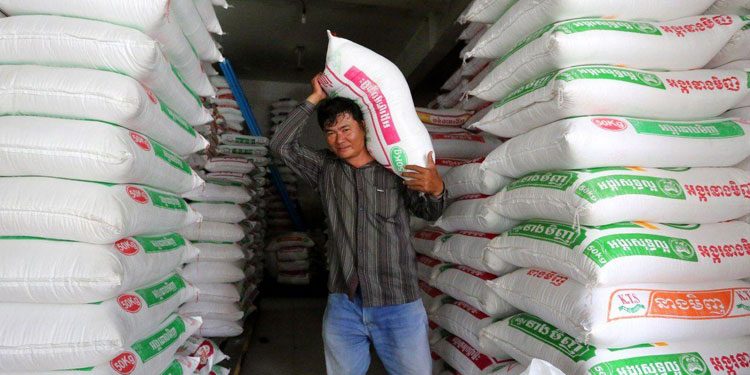 Cambodia Rice Federation (CRF) has claimed that the floods, which have had the biggest impact on the agriculture sector, will not hurt Cambodia’s rice exports this year.

Cambodia expects to export more than 800,000 tonnes of milled rice this year and reach the 1 million tonne milestone target by 2022.

Lun Yeng, CRF’s secretary-general, said some farmers had already harvested much of their paddy before the flooding so the amount for processing would be enough.

“Now rice millers are continuing to buy paddy from farmers every day even though some areas are blocked because the trucks cannot travel along flooded roads,” he said.

Yeng said that the floods could bring the ultimate yield slightly down but it will not affect the amount of rice exports because the amount of damaged paddy is still small compared with the total cultivated area of 2 million hectares. He said there are many  paddies unaffected.

He said, however, it could reduce the outflow of paddy to Vietnam that amounts to more than 2 million tonnes a year. “Because we still have surplus paddy in stock,  that will enable us be able to process enough rice for export,” he said. “The price of paddy would increase as well because rice millers will need more paddy.”

A report by the National Committee for Disaster  Management shows the floods affected 18 provinces and Phnom Penh and affected 213,289 hectares of paddies, of which 32,382 hectares have been damaged.

Yeng said the size of the affected area could be bigger after the floods end and final assessments are made. However, he said in some rice-producing provinces such as Preah Vihear and Kampong Thom, the paddy is providing a good yield.

“Now we are working with the Agricultural and Rural Development Bank (ARDB) to buy paddy from farmers for a fair price. We are trying to help farmers whose paddy is affected by flooding. We have enough money to buy it and the Ministry of Agriculture has prepared rice seed to distribute,” he said.

Cambodia produce more than 10 million tonnes of paddy a year of which about 3 million tonnes are premium fragrant paddy, according to a report from Agriculture Minister Veng Sakhon.

As of September this year, paddy cultivation was carried out on 2.7 million hectares nationwide.

Figures from the Ministry of Agriculture, Forestry and Fisheries show that Cambodia exported 488,775 tonnes of milled rice in the first nine months of this year, up 22.6 percent compared with the same period last year.

However, it is not all good news.

Soueng San, a representative from Trapeang Khangcheung organic rice community in Takeo province – which is not affected by flooding – said that the community is now seeking a loan from the ARDB to collect paddy from its 130 members. “My community has requested the loan to collect paddy from members but the request has been rejected by the bank because we do not have a hard title as collateral,” he said.