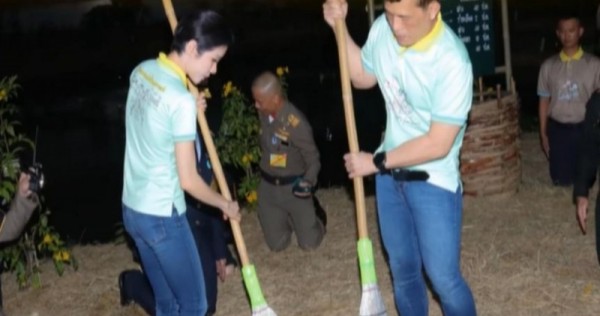 In a segment on the nightly royal bulletin on state and private TV channels on Saturday (Jan 9), the king and his consort – restored to her position last year after having been disgraced and stripped of her titles – are shown inspecting projects in jails across Thailand.

They are photographed sweeping floors and speaking to officials during the last two months of 2020, and the segment also featured interviews with inmates speaking about the benefits of the projects.

Such appearances have become more common since the King returned to Thailand with Queen Suthida and his entourage amid unprecedented protests calling for changes to the monarchy and the resignation of the military-backed prime minister.

Demands for the ouster of Prime Minister Prayut Chan-o-cha and curbs to newly expanded powers of the King broke a longstanding taboo in a nation where conservative tradition views the monarch as semi-divine and above criticism.

The palace has made no official comment on months of protests, although the King, when asked late last year what he would say to those demonstrating, told Channel 4 News: “We love them all the same.”

Soon after arriving back from Europe, where he spent most of 2020, the King, Queen Suthida and his daughters set out on visits around Thailand, sometimes posing for selfies and signing royal pictures.

The 35-year-old royal consort, Sineenat, joined some of the events.

After his coronation in 2019, the King conferred the title Royal Noble Consort on Sineenat, a former nurse, before stripping her of her titles for being “disloyal” in what an official statement at the time described as a rivalry with the queen.

Her titles were restored in September, and she was publicly declared “untainted” in another official statement.