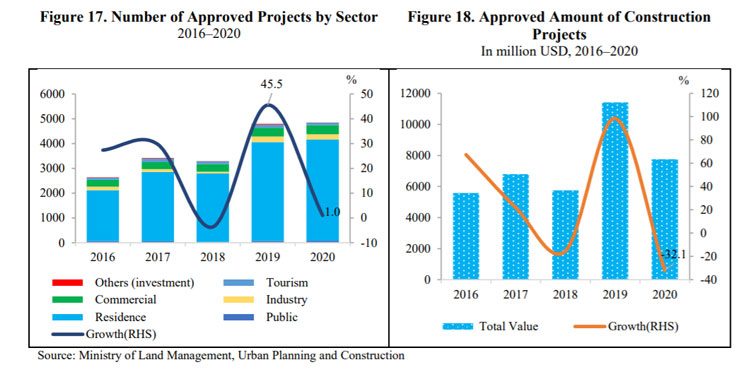 The banking sector remained resilient in 2020 despite the wider negative economic impacts of Covid-19, according to the National Bank of Cambodia’s (NBC’s) Financial Stability Review 2020.

Cambodia’s economy experienced negative growth of 3.1 percent in 2020 – the first negative growth rate recorded since 1994 – but the banking sector was well-protected against pandemic-induced shocks because of its strong capital and liquidity and “accommodative global financial conditions”.

While the construction and real estate sectors were dealt a heavy blow by the pandemic, the agriculture sector grew because of increased labour availability, the NBC said.

Tourism and garment and footwear exports were the hardest-hit sectors by Covid-19, but some of these losses were offset by increases in exports of electrical parts, bicycles, rice and rubber.

While foreign direct investment (FDI) dropped by 1 percent in the country as a whole, the financial and banking sectors enjoyed a 12.8 percent uptick in FDI.

Inflation increased from one percentage point to 2.9 percent in 2020, partly because of higher food prices at the beginning of the pandemic, the report said. However, a drop in oil prices offset what could have been a more dramatic increase in inflation.

Remittances dropped by 17 percent to $1.2 billion because the pandemic suspended or stopped work in several countries hosting Cambodian migrant workers, forcing many to return home and preventing the migration of new workers.

The international reserve increased by 14 percent and stood at $21.3 billion at the end of 2020.

“However, in the context of high dollarisation and the managed floating exchange rate regime, the country needs to accumulate more reserves as buffers to maintain macro-economic and financial stability,” the NBC said.

Government revenue fell because of tax relief measures and suffocated economic activity, dropping 19 percent to $5.4 billion, according to the report. By contrast, in 2019, government revenue increased by 23 percent.

“This was primarily due to a fall in tax collection (13 percent), of which taxes on goods and services decreased by 21 percent and taxes on international trade and transactions decreased by 24.1 percent due to the policy measures on tax relief and the reduced economic activities,” the report said.

The government spent $6.1 billion in 2020, an increase of 0.7 percent from 2019,  mostly because of increased spending on social welfare and wages, while government debt increased by 16 percent to $8.8 billion.

“Social benefits, including health-related benefits and income assistance, doubled this year in response to the government’s support of the people affected by Covid-19,” the report said.

In its outlook, the NBC said Cambodia’s growth will depend on how quickly the rest of the world recovers from Covid-19. Trade tensions between the US and China could complicate matters, but also may lead some international companies to seek to diversify their supply chains, which could end up benefiting Cambodia, the report said.

While agriculture is expected to rebound on the back of a global recovery, the outlook for the tourism, real estate and construction sectors remains uncertain.

Construction and real estate were expected to recover before the Feb 20 incident, the NBC said, but the outbreak could hinder those sectors’ rate of recovery.

The tourism sector is expected to take longer to recover because of a potential unwillingness to travel from Covid-19, border restrictions and reduced disposable income.