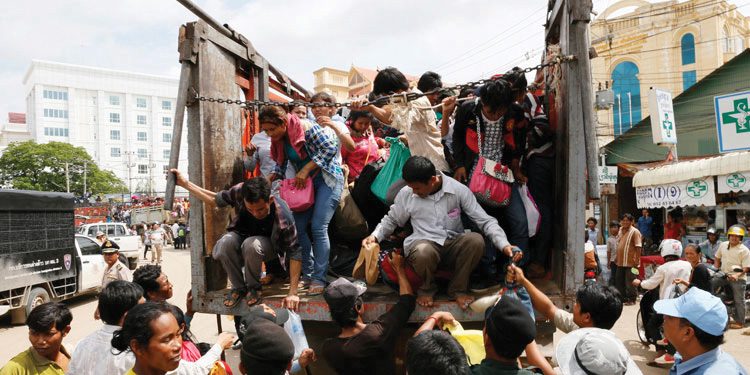 As the Coronavirus pandemic hits jobs and wages in many sectors of the global economy, the amount of money sent back home by Cambodian migrant workers from South Korea and Japan via ACLEDA Bank Plc in the first haft of this year declined nearly 10 percent compared with the same period last year, according to figures from the finance institution.

The figure shows that Cambodian migrant workers in Japan and South Korea sent combined money back home of $12.91 million, a decline of $1.41million (9.83 percent).

“Because of the impact of COVID-19, money sent back home by migrant workers saw a decline during the first haft this year especially form South Korea, where most workers sent it via the bank,” she said.

However, Amara expects that in the time remaining this year, the amount would see an increase as more businesses reopen.

According to a report by the World Economic Forum (WEF), the Coronavirus pandemic has slowed down in the amount of money sent home by migrant workers.

The report said that remittances shelter a large number of poor and vulnerable households, underpinning the survival strategies for more than 1 billion people.

A report from the National Bank of Cambodia (NBC) shows that in 2018, Cambodian migrants sent home about $1.4 billion in remittances. Of that amount, $53 million came from South Korea.

More than 36,000 Cambodians were recruited last year alone to work in countries such as Thailand, Malaysia, Singapore, Vietnam, Indonesia and China, according to the Foreign Affairs Ministry.

The World Bank projects that within five years, global remittances will outstrip overseas aid and foreign direct investment combined, reflecting the extent to which global financial flows have been reshaped by migration. However, it will decline sharply by about 20 percent in 2020 because of the COVID-19 pandemic.

South Korea and Thailand are the largest sources of remittances to Cambodia.

Hundreds of thousands of Cambodian migrant workers returned from Thailand because of the Coronavirus pandemic and, on average, they send $300 a month back home.