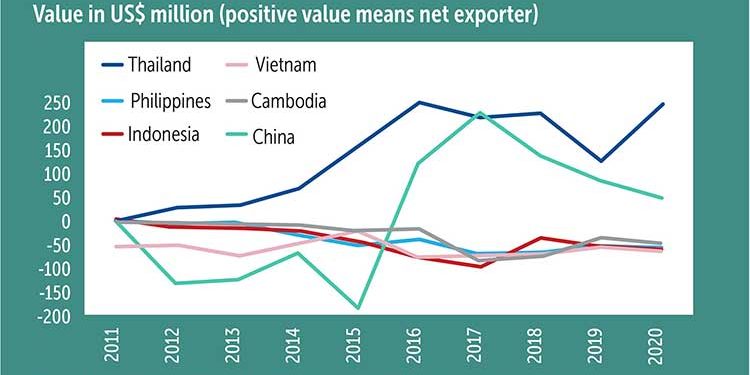 The mechanisation of the sugar cane sector, and in particular sugar cane harvesting, remains low across Southeast Asia relative to other major producing markets, namely Brazil and others in South America, India and China.

The country has transformed from being a net importer in 2011, to a net exporter of combine harvester-threshers and other harvesting machinery valued at over $240 million in 2020, according to Trade Map data. The top destination markets are other Asean countries including Cambodia, Myanmar and the Philippines.

Cambodia’s five major sugar producers exported just four per cent of the country’s planned refined sugar capacity to the international market in was about 700,000 toones in the last available production figures for 2019.

In Thailand, around 30% of the sugar cane crop is harvested by machine, and even less among some Asean producers, compared with around 95% in Brazil. This is despite the fact that many Southeast Asian countries have made notable moves to mechanise rice production.

A number of issues have hindered the use of combine harvesters and other high-tech harvesting machinery in the Asean sugar sector. First, production is dominated by small-scale farms. For example, in the Philippines, around 80% of producers own farms with less than 5 hectares. This reduces the financial viability of buying (or renting) expensive machinery.

Second, a lot of the sugar cane produced in Southeast Asia, especially by smallholder farmers, is grown on uneven and difficult terrain for a combine harvester to operate on.

Over the next five years, we expect increased mechanisation of sugar production across Southeast Asia, although machinery use will remain below Brazil and China. The challenges outlined above will persist despite some government and industry attempts to address them.

Indeed, in most Southeast Asian countries, sugar cane combine harvesters have been present for decades, but uptake has been slow due to the structural make-up of the sector.

The slow economic recovery from the Covid-19 pandemic will also weigh on mechanisation efforts in the short to medium term. Despite these continued challenges, we expect some Asean markets to outperform.

We identify Thailand as a key opportunity market for the mechanisation of sugarcane harvesting, with 6.5 million tonnes of absolute growth in sugar output between 2020-21 and 2024-25. In 2024-25 we forecast Thailand to be the third-largest producer of sugar cane globally, behind Brazil and India.

This growth will be the result of recovery from drought, sugar cane yield improvements and strong export opportunities. In line with production growth, the use of machinery will increase. Good prospects for the sector will likely encourage investment, also supporting mechanisation.

Although we highlight the risks to production caused by reform of Thailand’s sugar sector in response to pressure from Brazil, especially deregulation in 2018 and the elimination of the sugar cane price support programme, these changes could create the conditions for mechanisation.

MORE CONSOLIDATION
In particular, the consolidation of the domestic market, including cane producers, would address the issue of small farm size and the lack of financial viability of machine use. Producers will also need to improve efficiency in order to compete with sugar prices on the international market, which can be achieved through mechanisation.

The Thai government is trying to stop the use of burning as a method of sugar cane harvesting, which in turn encourages the use of combine harvesters. Up to 80% of sugar cane in the country is still harvested through burning. Burning has negative environmental effects, as well as often reducing the weight of the sugar cane.

In order to deter the use of burning, the government has set quotas for how much of the sugar cane collected by mills must be fresh (not harvested through burning).

However, labour shortages during the harvest season due to migration from rural areas to cities has meant that these quotas are often not successful in reducing burning rates, which have remained relatively stable over the past decade. Industry stakeholders have appealed to the government for support for farmers to buy or hire machinery to avoid the need to burn cane.

Some mills already assist sugar cane producers in accessing combine harvesters. As the government continues to work towards the goal of reducing sugar cane burning, we expect increased support for mechanisation to be considered.

As the use of sugar cane combine harvesters in Thailand increases, we expect the country to also play a role in the production and export of these machines to other markets in the region. In Thailand’s sugar sector, around two-thirds of the combine harvesters used are imported, according to a study of 249 farmers in 2020.

However, domestic manufacturers are dominant in the production of small and medium-scale harvesters and would benefit from increased mechanisation by smaller-scale sugar cane producers. These manufacturers include Thai Roong Ruang Manufacturing, Samart Kaset-Yon Partnership and Pradit & Friends Machinery.

MACHINERY HUB
As Thailand’s use of sugar cane combine harvesters increases, we believe the country will be a supplier of cane harvesting machinery to other producing countries in Southeast Asia. Although a lot of the machinery used in the sugar sector is imported, Thailand’s exports of harvesting machinery for different agricultural products (such as rice) has increased substantially in recent years.

In Vietnam, the Philippines and Cambodia, Thailand has been the top supplier of harvesting machinery imports over recent years. As demand for sugar cane combine harvesters increases in Thailand, we expect domestic production and exports of sugar cane harvesting machinery to also increase due to the country’s existing position as a regional supply hub for agricultural machinery. This will be supported by increased use of combine harvesters in the sugar sector in other Southeast Asian countries.