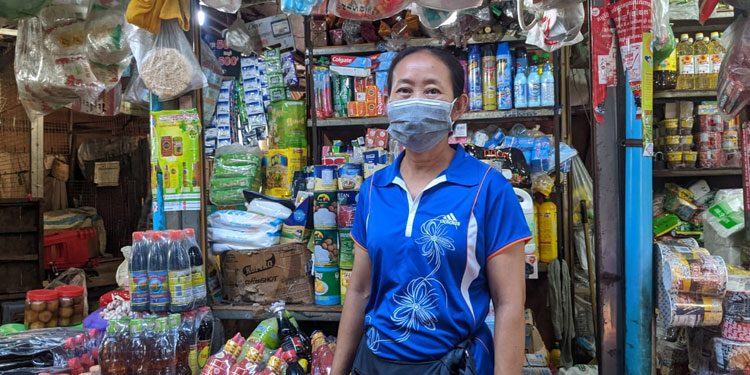 Phnom Penh’s Kandal Market has reopened to a limited number of daily shoppers, but after being closed for more than a month and with far fewer customers visiting, many vendors are struggling to survive.

Kandal Market is a typical Cambodian-style local market with offerings including clothes, jewelry, shoes and bags, but its major focus is on providing fresh food to locals. On April 19 the government ordered the market to close in order to stem the spread of Covid-19 through the capital, which cut off income for most of the vendors and their families. The market was initially reopened on a trial basis on May 22 with only a few stalls operating. That was expanded on May 24, with most vendors being allowed to open, but the maximum number of customers was limited to 100 daily, according to Leang Kenmhorn, vice-president of the Kandal Market Commission, the company that oversees the area.

Before being allowed back into the market all vendors were required to test negative for Covid-19 and have received their second vaccination dose. Leang added that for the time being the market would continue restricting daily visitors to 100, Pre-closing , the market’s daily average was 800-1,000 shoppers.

She noted that although rents had been suspended for vendors since March, many were still struggling to survive, a sentiment echoed by many sellers.

Tu Mvey Vat, a 75 year-old grandmother, previously ran a shop selling bags and clothes. While the market was closed, she was forced to stay at home without any income and rely on help from her family and the government. Although she has returned to the market to observe how it is functioning, she decided not to reopen her store, saying: “There are still not enough customers and most of them stay on the outside of the market. People just come here to buy important things. This is the first time in my life I have not been able to work, but I still need to pay back the bank every month.”

Next door Serv Mey, who previously sold socks and second-hand clothes was closing her stall, stating “I have to shut my shop because I have no income and cannot afford to pay the monthly security guard fees ($7.40). I will move to share a stall with my family”.

Fellow shop owner Bun Thyda, who runs a general store, acknowledged that she was luckier than other vendors as she owns her shop and does not have debt with the bank. She added with so little foot traffic though, she was not earning enough to feed her family and was also reliant on government help.

Management remains optimistic, saying while it is unknown when more customers will be allowed, at least vendors are earning again.