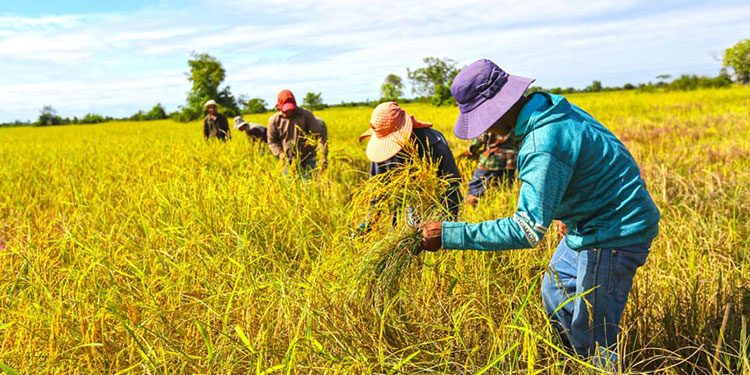 Cambodia’s paddy rice is flowing to the market in Vietnam as local farmers are harvesting  the latest crop of the year.

Minister of Agriculture, Forestry and Fisheries Veng Sakhon said to date a total of 22,131 tonnes of different varieties of paddy rice was exported to Vietnam.

“The export is done through Prey Veng province and there are a total of 10,524 tonnes per day, but on some days 22,131 tonnes have been exported to Vietnam, ” he said.

Yan Moth, chairman of Meanchey community, in Ba Phnom district, Prey Veng province told Khmer Times by phone that middlemen have come to buy the paddy rice from farmers in his community for export to Vietnam for the last month.

“The middlemen came and bought directly from our farmers and exported about four to five trucks to Vietnam per day,” he said.

Last year, its price was down to $0.17 to 0.19 per kilogramme and sometimes the middlemen did not come to buy, but this year the price is good with some selling for $0.24 per kilogramme, he said.

Vietnam is currently one of the main buyers of Cambodia’s paddy rice, but most of the exports have no clear record and some have been done by smuggling.

According to the Cambodia Rice Federation (CRF), Cambodia exported 536,305 tonnes of milled rice in the first ten months of 2020, a year-on-year increase of 17.11 percent.

Cambodia’s gross revenue from rice exports in the first ten months of this year increased by nearly $47 million or 15 percent compared to the same period in 2019.

The figures from the Cambodia Rice Federation showed that the Kingdom earned in total $366.44 million from rice exports, in the January-October period.

Regional Comprehensive Economic Partnership (RCEP) to be signed this Sunday