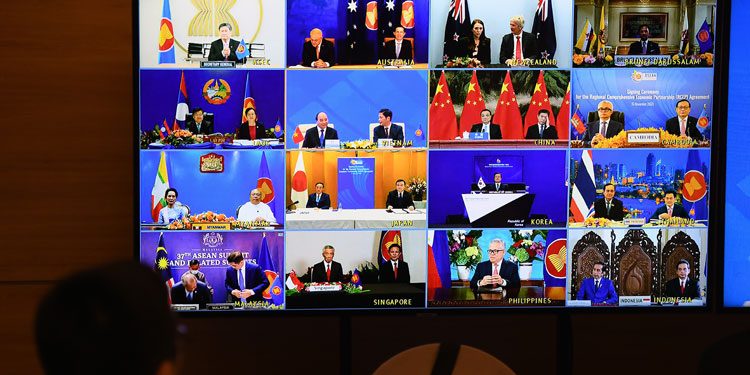 The long-awaited Asia-Pacific Regional Comprehensive Economic Partnership (RCEP) agreement was officially signed yesterday.  The signing brings renewed hopes for comprehensive change in the flow of regional trade and investment and the promotion of intra-bloc supply chains capable of bolstering trust among members of the region’s business sector.

The terms of the agreement have proved elusive since negotiations between Asean’s member states and six free trade partners, (Australia, China, India, Japan, South Korea and New Zealand), began in 2012.

The final agreement includes 15 signatory countries, India having dropped out of the negotiations last year, citing that it was no longer in line with India’s national interest or in adherence with the principles agreed to by the participating countries at the inception of the negotiations.

The 15 signatory countries to the RCEP remain open to India reconsidering its decision.

“All of the participating countries still welcome the prospect of India joining the RCEP,” said Seang Thay, secretary of state of the Ministry of Commerce. He pointed out that India had been a participant in the negotiations since they were convened in Phnom Penh in 2012. Thay also noted that India is a comprehensive partner in the region and will no doubt continue to contribute to the region’s economic expansion and participate in the evolution of a more comprehensive regional production chain.

Thay said studies by the Economic  Research Institute for Asean and East Asia (ERIA) show that the successful conclusion of the negotiations could contribute additional annual sector growth across the board to the Cambodian economy. ERIA projections anticipate exports growing by 7.3 percent annually, foreign direct investment by 23.4 percent and gross domestic product (GDP) by an additional 2 percent as a result of the signing and the agreement’s final ratification.

Jayant Menon, a visiting senior fellow with ISEAS-Yusof Ishak Institute, said the signing of the agreement is a positive development coming at a time of a rising backlash against globalisation and growing protectionist pressures taking hold around the globe. Against this tide, the RCEP has potentially birthed the world’s largest free trade agreement (FTA), one that accounts for almost a third of the world’s population and economic output.

“The RCEP will focus on harmonising rules and regulations.  Regulatory convergence will support the development of the region’s supply chains and, in doing so, reduce the cost of doing business. But RCEP will only make a difference if the individual nation signatories ratify the agreement quickly and implement it faithfully,” Dr Menon said.

Chheng Kimlong, second vice-president of the Cambodian think tank Asian Vision Institute (AVI), said that joining the RCEP provides Cambodia with many new opportunities including the establishment of untapped export markets, the enhanced attraction of foreign investment and a greater potential for upgrading the Kingdom’s economic foundation and economic growth base.

He noted that once the RCEP deal is in effect that it could potentially become the world’s largest trading alliance, representing 30 percent of global trade and roughly 30 percent of global GDP. He added Cambodia will be able to reconfigure export markets and product diversification, upgrading the Kingdom’s product and service competitiveness for domestic and export markets.

“Opening up the Cambodian economy to attract inbound investment and technology has been a cornerstone of our economic development.  The mega deal represented by the RCEP can be a dramatic driver of growth, despite there being some challenges that remain to be addressed along the way,” Kimlong said.