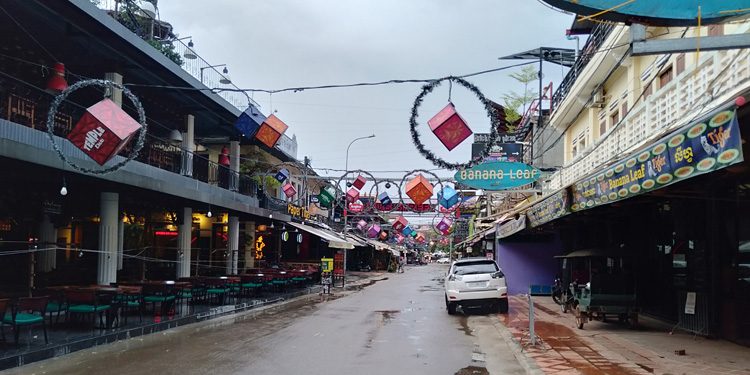 Since Siem Reap province publicised  “its reopening” last month, the Ministry of Tourism has announced new safety guidelines and codes of conduct for tourism businesses to prevent the spread of COVID-19 and attract domestic tourists.

Khmer Times visited the famous temple town this week to report from the ground the current state of the once-tourism hotspot finding near-apocalyptic scenes with extreme levels of abandoned shop fronts and sense of despair.

The mass exodus of foreign arrivals – due to the ongoing COVID-19 pandemic – arguably has hit the town worse than any other part of the Kingdom.

With business owners along the street now facing the prospect of three to five years of significantly lower arrivals, many have appeared to simply walk away.

Established in the early 1990s after mass tourism came to the Kingdom, Pub Street has brought in much- needed foreign currency from tourists looking to eat and drink after a day spent exploring the temples of Angkor Wat.

It was this foreign currency that turned the street from only a few makeshift bars into the town’s economic powerhouse, bringing much-needed employment into a province still considered as one of the poorest in the country.

However, walking down the famous road last week to interview business owners on the developments since the reopening was announced last month, Khmer Times could not find one business owner or patron to speak to on the main road.

Having to venture off the main road there was a single bar open showing English sports and catering to the few remaining foreigners that live permanently in the town.

It is affecting about 8,000 workers, according to Siem Reap provincial tourism department director Ngov Seng Kak.

Speaking to a local patron who did not disclose their name, Khmer Times was also told anecdotal evidence that most business owners can see the writing on the wall and have chosen to cash in anything of value and have simply packed up shop.

“The town is dead and things seem to be only getting  worse. Most people here understand that previous numbers of foreigner arrivals, especially from Europe and America, won’t return for at least the next three to five years and maybe not even then. It is better to cut your losses of $50,000 now then continue to bleed cash with no end date in sight,” a local patron said.

“Most people have already cashed in anything of value such as stock and other equipment and are now looking to other opportunities. Of course, there will still be a market for tourists but nothing near the scale there was before,” he added.

On top of the COVID-19 pandemic, the area is also currently undergoing significant road works implemented by the Minister of Public Works and Transport Sun Chanthol with Siem Reap Provincial Governor Tea Seiha.

With the infrastructure plan launched last month designed to “improve the reputation of the nation on the international stage and attract tourists”. With a large scale construction plan similar to what the government has done for Preah Sihanouk province.

“It is the high time to study the main plan for road infrastructure in Siem Reap city to become like Preah Sihanouk. Siem Reap is a tourism city that can enhance the nation’s reputation on the international map through foreign visitors,” said Chanthol.

Although, for those who have recently visited Sihanoukville will attest, large scale road construction does not make for pleasant surroundings.

With another popular tourist street, Sok San road now left as a dangerous mudslide with large ditches on both sides and potentially live electrical wiring laying along the ground.

There are now serious concerns that with such little foreign arrivals predicted over the next three to five years the majority of businesses will be forced to close. Leaving some to fear that the town may never be the same again.

“If this continues for another few years you could well find Pub Street is in complete disrepair, it’s only been about four months and half the businesses around here already look abandoned,” the local patron added.