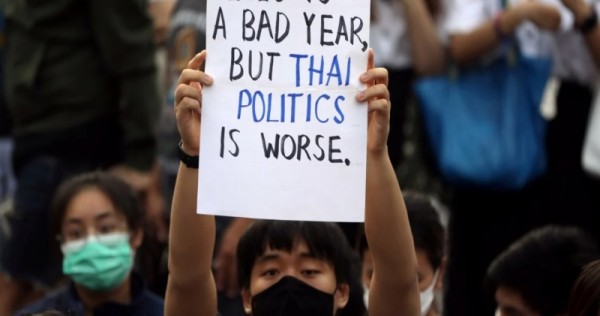 The pro-democracy protests in Thailand have seen an outpouring of support from K-pop fans inside the country and around the world, with the fans raising both funds and awareness about the movement.

Thai fan communities of various K-pop groups have rallied together to pool donations in support of the protesters, who are demanding changes including the resignation of premier Prayuth Chan-ocha – a former military chief brought to power in a 2014 coup – reforms to the powerful monarchy and a new constitution.

Actor-activist Intira “Sai” Charoenpura posted on Twitter that the funds raised from fans of groups including BTS , Exo , Got7 , and Girls’ Generation had helped buy equipment such as helmets and raincoats.

Some protesters have turned the Girls’ Generation song Into The New World into a soundtrack for the movement. The 2007 debut single by the influential girl group has a history of being sung at South Korean pro-democracy protests as an expression of hope for a brighter future.

While K-pop fans have a long history of donating to charitable causes and social justice efforts, this year has seen an uptick in political activism by K-pop fans, who have used their communities to bolster causes close to their hearts.

This summer, K-pop fan communities made headlines for supporting the Black Lives Matter movement in the United States and for using social media platforms to drown out the voices of white supremacists – and also for supposedly reducing the turnout at US President Donald Trump’s rally in Tulsa, in the US state of Oklahoma, in June by booking seats, then not showing up.

“Violence cannot resolve any problems,” BamBam tweeted on Oct 17. “Do not use violence against the public. Being open to hearing and respecting individual rights and freedoms are the starting points for a solution. Please everyone take care of yourselves.”

Sources have informed me that the water canon trucks used against protesters by the Thai police are from South Korea. Exports of armored vehicles by South Korea has been part of the country's so-called "K-Cop Wave"—a name emulating South Korea's exports of popular culture https://t.co/WCCOwQhKDP

While K-pop fans and stars may be coming out in support of the pro-democracy protesters, South Korea’s impact on the cause isn’t entirely positive.

Joseph Kim, a Seoul-based correspondent for Reuters, tweeted on October 20 that sources had said the water cannon trucks being used against Thai protesters had come from South Korea, the latest in what he says is known as the “K-cop wave” – an obviously wry take on the export of South Korean pop culture globally, nicknamed the Korean wave or hallyu .

Beyond direct donations, some K-pop fans are refusing to support institutions seen as opposing the pro-democracy movement. One major field some Thai K-pop fans are considering divesting from is advertising.

K-pop fans often buy advertising space in public spaces and on transport systems across the world to support artists or celebrate occasions such as album releases or a star’s birthday. But now, some fans are rethinking where they spend money on placing adverts.

The Twitter account BTS Thailand on Oct 17 suggested that BTS’ fans, known as Army, and other K-pop fans should reconsider advertising on billboards displayed throughout the Bangkok Mass Transit System, known as the BTS, and the Metropolitan Rapid Transit (MRT) systems, “as these two organisations have been involved in making it difficult for protesters and the general public”.

All the stations of Bangkok’s elevated BTS were closed last Saturday in an attempt to thwart the protesters, while one line of the underground MRT was also shut.

Cambodia and US have signed MoU on patent cooperation