Cambodia and US have signed MoU on patent cooperation 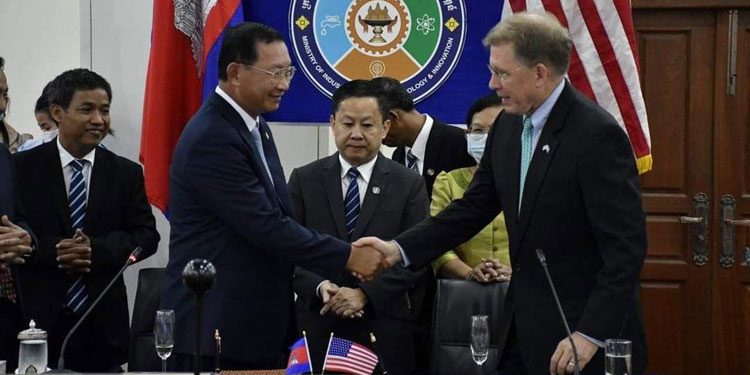 Cambodia and the US have signed a memorandum of understanding (MoU) on patent cooperation, the move that will accelerate the bilateral trade between the two countries, according to the Ministry of Industry, Science, Technology and Innovation (MISTI).

The cooperation was signed between Cham Prasidh, MISTI’s minister, and Andrei Lancu, the president of the United States Patent and Trademark Office (USPTO) online yesterday.

Prasidh said this is a cooperation to accelerate patent issuance in Cambodia which has been made long been in place with many countries, including Singapore, Japan, China, South Korea and the European Union, in order to expedite the registration and protection of patent validation in Cambodia faster and more often.

US Ambassador to Cambodia Patrick Murphy, who was present at the signing ceremony at the Ministry of Industry and Science, Technology and Innovation, noted the two countries’ relations have been strengthening for a long time and this year is the 70th anniversary of their diplomatic relations.

Prasidh said the agreement is a testament to further boosting economic growth and investment confidence.

“The implementation of patent cooperation that Cambodia has made with many countries, including the United States, comes at a time when Cambodia has insufficient human and material resources and an insufficient budget for inspection, evaluation and certification to protect the work of the owner,” he said.

The minister said the cooperation is also contributing to attracting more and more investors from the United States in technology with various inventions and services in Cambodia that are protected by intellectual property rights.

“This will publicise the cooperation between the two countries, especially US companies, to register patents in Cambodia for the purpose of its investment,” he said.

Bilateral trade between Cambodia and the US was recorded at about $4.3 billion in the first eight months of this year, an increase of 15.6 percent compared with the same period last year.

According to statistics from the US Census Bureau, from January to August, the Kingdom exported about $4.1 billion of products to the US, up 22 percent compared with the same period last year.

In August alone, the two-way trade was valued at $723.8 million, up 9 percent compared with the same month last year. Of the figure, $695 million were Cambodian exports.

Cambodia mainly exported textiles, footwear, travel goods and agricultural products to the US and imported vehicles, animal feed and machinery.

Last year, the bilateral trade between the two countries reached $5.8 billion, a year-on-year increase of 37 percent.

Owners of hotel and guesthouse in Cambodia want more relief