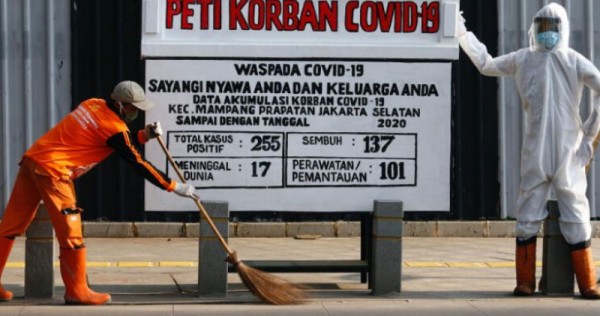 JAKARTA – Authorities in Indonesia’s capital are experimenting with some shock tactics to fight Covid-19, by displaying an empty coffin at a busy intersection as a reminder of the dangers of the highly contagious virus.

The words “Covid-19 victim” are painted red on the casket on display in one district of Jakarta, which is the epicentre of the coronavirus outbreak in Indonesia.

A mannequin faysal testing a protective suit, mask and face-shield, stands by the faux coffin, while a board underneath displays the latest local district’s infection and death tally.

“Maybe the action taken by the leadership is a bit extreme but this is how we hope to raise awareness,” said Mr Djaharuddin, chief of Jakarta’s Mampang Prapatan subdistrict.

The coronavirus has infected 143,000 people and killed more than 6,200 in Indonesia, which has Southeast Asia’s highest death rate from the disease.

Schools remain closed in Jakarta, home to at least ten million people, but restaurants and public transport can operate at reduced capacity as part of a gradual easing of curbs in the city since June. Social distancing measures are in place nationwide, but are not always heeded.

“Setting up the coffin helps people to stay alert of the situation so that they can change their behaviour.”

A village on Java island has used a similar approach, deploying a cast of “ghosts” to patrol streets, hoping an age-old superstition will keep people indoors.

Jakarta’s governor Anies Baswedan this week said he was considering applying an “emergency brake” on a phased transition to normalcy amid soaring cases in the city.

Mr Muhamad Soleh, who has a noodle stall just across the street, said he liked the casket idea.

“We need to recognise the fact that Covid-19 is dangerous, and with a coffin set up here I think it’s very effective,” he said.