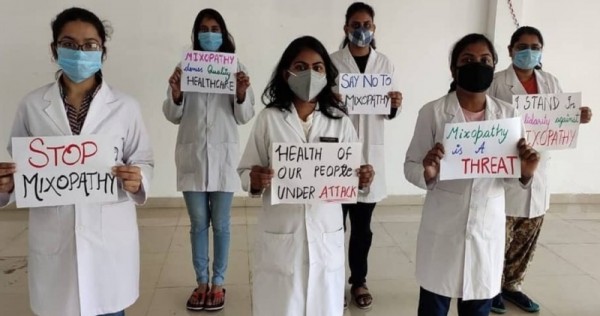 Doctors and medical students across India are taking a second oath, in addition to their Hippocratic oath.

They are formally pledging to oppose what they say is the government’s attempt to “mix” modern medicine with Ayurveda – the 5,000-year-old Indian traditional medicine – which, they predict, will have catastrophic consequences for patients.

“Say No to Mixopathy” is the name of their campaign. Its Facebook page shows doctors and students taking the oath and signing a pledge.

It is just one means doctors trained in Western medicine are using to pressure the government to withdraw the plan to allow Ayurveda practitioners to perform operations.

The Central Council of Indian Medicine, which regulates alternative medicine, announced on Nov 20 that it will allow postgraduates in Ayurveda to receive two years of formal training for more than 40 procedures in general surgery, among them orthopaedic, ophthalmic, ear, nose and throat (ENT), and dental procedures.

“Beyond my comprehension” is how one doctor, paediatrician Arun Shah, described the decision, voicing the modern medical community’s sentiments.

“You cannot mix alternative medicine with modern medicine when their basic principles are in conflict. You cannot unleash these practitioners on the public when they don’t know the basics of modern medicine. We have been trained in scientific, evidence-based methods. The consequences will be serious,” said Shah, the former head of the Indian Academy of Paediatrics.

New Delhi gynaecologist Dr Anita Nayar says the lines separating different fields of treatment must be respected. “Integrating the two systems could potentially jeopardise patient safety. Ayurvedic practitioners should practise their system of medicine, just as practitioners of modern medicine practise what they have been trained in,” she said.

The government under Narendra Modi has been actively promoting traditional medicine out of its belief that it can offer a great deal to the modern world.

Modi himself has often spoken of the supremacy of ancient India in many realms compared with modern science and technology.

While opening two new Ayurvedic institutes last month at Jamnagar in Gujarat and Jaipur in Rajasthan, Modi said: “Ayurveda is not just an alternative today, but is one of the key elements of the country’s health policy.”

During the coronavirus pandemic, encouraged by statements from Modi’s ministers claiming the superiority of alternative systems, some Indians have been taking Ayurvedic potions in the belief that they can prevent Covid-19 infections .

The Indian Medical Association (IMA), a national organisation of doctors of the modern scientific system of medicine founded in 1928, took strong exception to ministers of the ruling Bharatiya Janata Party promoting such methods.

But if it was irritated then, it is incandescent now over Ayurvedic practitioners being allowed to perform operations.

In a statement on Nov 22, it condemned the decision, describing it as “poaching the disciplines of modern medicine through back door means” and a “retrograde step of mixing the systems”.

“Why don’t we just pack up modern medicine and go home?” asked a visibly outraged former IMA president, Dr Rajan Sharma. “Why did we bother studying for seven or eight years to become doctors and 12 years to become surgeons? All of us are horrified at this ridiculous decision.”

Western doctors insist they have no beef with traditional medicine. On the contrary, many are proud of India’s heritage. But their point is that the two systems are different and mixing them is dangerous.

“Ayurveda has its own clinical parameters, methods, and historical traditions. I am proud of this ancient learning and happy if it flourishes. But to take such a decision when we are in the midst of a pandemic that even modern science is struggling to control is absurd,” said Sharma.

Many top Indian newspapers have published editorials criticising the move. “It is unlikely that Ayurveda can match modern medicine when it comes not just to efficacy but also training, quality research and the output of knowledge. Had this been the case, India’s rich and famous would have made a beeline for Ayurveda clinics and not state-of-the-art hospitals when afflicted with a serious illness,” wrote The Telegraph .

India has an estimated 450,000 Ayurvedic practitioners. The undergraduate Ayurveda course takes just over five years, and although the curriculum includes some modern medicine, degree holders have not been allowed to practise modern medicine.

Dr Sandeep Madaan, a senior Ayurvedic consultant at the Aastha Ayurveda Clinic in New Delhi, says the techniques used in Ayurveda are very different, right down to the instruments. For instance, Ayurvedic doctors treating pterygium, a pinkish, triangular tissue growth on the cornea of the eye, use a special alkaline powder to remove it. Western medicine would use eye drops or, in serious cases, surgery.

The National Institute of Ayurveda on its website also describes Ayurveda’s own surgical techniques.

“It takes surgeons 12 years to qualify after much theoretical knowledge and training and stringent residencies. But after two years, these people are going to do cataract surgery, endoscopies and bowel resections?” he asked.

“The government is trying to smuggle Ayurvedic practitioners into the mainstream to give them more status. It is making false claims about what they currently do so as to elevate them. All they will do is use our equipment and our drugs. They will be stealing what modern medicine has to offer and portraying it as their contribution.”

The IMA is determined to get the decision overturned and plans legal action. The group finds the timing, during a pandemic when doctors are risking their lives every day, unconscionable.

“I have lost almost 700 of my fellow doctors to Covid-19. Is this the respect the government pays them? We will fight this tooth and nail,” said Sharma.