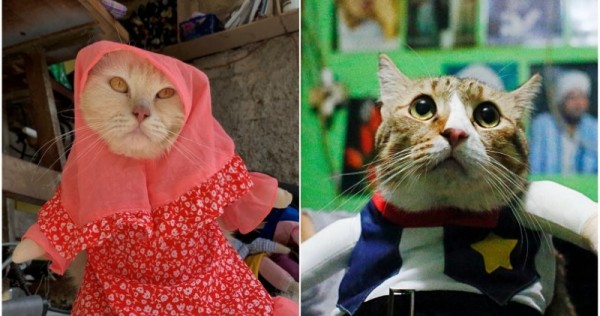 BOGOR, Indonesia – It may not be haute couture, but former Indonesian school teacher-turned-tailor Fredi Lugina Priadi has found a lucrative market for his cat fashions, creating unique costumes and cosplay outfits for cats.

After quitting his job as a teacher, he tried his hand at a number of businesses, including running a motorbike repair shop, before stumbling upon cat fashions, an idea from one of his cat-loving cousins.

The 39-year-old now supplies outfits to picky pet owners looking to dress their felines in everything from superhero outfits for figures such as Thor and Superman to cosplay characters, nurse uniforms and even traditional Islamic wear.

“At first, my cousins who love cats gave me the idea to make these costumes and I thought it was weird,” said Mr Fredi.

“But it turned out to be funny to see them with costumes,” he said, speaking from his rustic workshop with a sewing machine in Bogor just south of the capital Jakarta.

Since setting up his online business three years ago, he now generates up to 3 million rupiah (S$286) a month if he sells at least four pieces a day. Each outfit is priced at between US$6 and U$10.

Customer Risma Sandra Irawan has bought at least 30 outfits for her cat Sogan and puts in orders for special occasions like the Muslim festival of Eid al-Fitr or at Christmas.

“Its for fun only… it can relieve our stress,” said Ms Risma, who created an account on social media platform TikTok showing off Sogan’s outfits that has more than 50,000 followers.

While many find it cute, Mr Fredi has received some negative comments on social media from those who consider it cruel to dress up a cat and he advises buyers not to make their pet wear an outfit for too long.

Indeed, in the wake of a boom in social media postings of pets dressed up, often in increasingly bizarre poses or outfits, some animal welfare groups have issued guidelines to make owners more aware of any signs that it may be causing their pet distress.