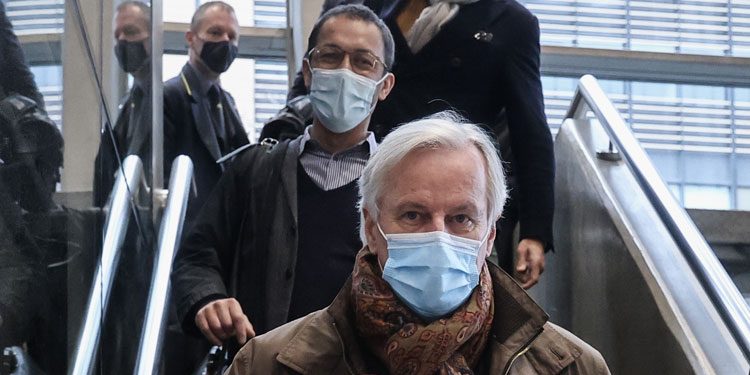 0
SHARES
6
VIEWS
Share on FacebookShare on Twitter
AFP – The EU and Britain’s chief Brexit negotiators were a last-ditch bid to break months of deadlock yesterday, as trade talks limp back to Brussels, surviving on borrowed time.

Michel Barnier and his UK counterpart David Frost will once again try to find common ground on the critical issues that have split both sides since talks began in March.

Both sides agreed that “significant differences” remained, but that talks should continue – at least until their next scheduled call today. “Whilst recognising the seriousness of these differences, we agreed that a further effort should be undertaken by our negotiating teams to assess whether they can be resolved,” the leaders said in a statement following their conversation.

“We are therefore instructing our chief negotiators to reconvene tomorrow in Brussels. We will speak again on Monday evening.”

The high-level intervention came after Barnier and Frost broke off talks late on Friday after day and night negotiations over seven days in London failed to reach a deal. While much has been agreed, the sides cannot close out the thorniest debates over fishing rights, fair trade rules and an enforcement mechanism to govern any deal.

Britain formally left the EU in January, nearly four years after a referendum on membership that divided the nation.

But it is bound to the EU’s tariff-free single market until the end of the year – by which time the two sides must try to agree on the exact nature of their future relationship.

“Anything is possible. The three open issues are linked by Britain’s intent to keep sovereignty a priority and Europe’s fear of UK freeloading,” a source with close knowledge of the talks said.

Without a deal, the bulk of cross-Channel trade will revert to World Trade Organization terms, a return to tariffs and quotas after almost five decades of close economic and political integration.

Talks through this year have finalised most aspects of an agreement, with Britain set to leave the EU single market and customs union, but the three core issues are unresolved. “We will see if there is a way forward,” EU chief negotiator Barnier said on Saturday.

Johnson has insisted Britain will “prosper mightily” whatever the outcome of the talks, but he will face severe political and economic fallout if he cannot seal a deal.

“If we fail to get an agreement with the European Union, this will be a serious failure of statecraft,” Conservative lawmaker Tom Tugendhat, chair of parliament’s foreign affairs committee, told the Lowy Institute in an interview published Saturday.

This article was first published in Khmer Times. All contents and images are copyright to their respective owners and sources.
Previous Post