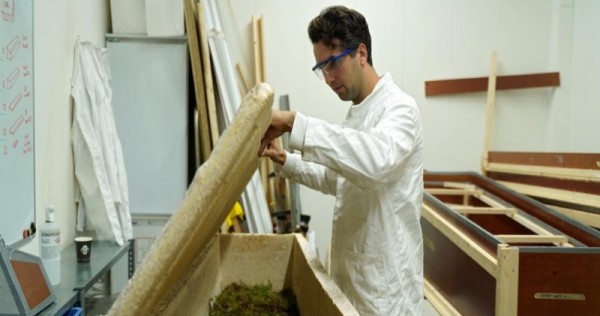 DELFT, Netherlands – A Dutch start-up has created a biodegradable “living coffin” made of a fungus, instead of wood, which it says can convert a decomposing human body into key nutrients for plants.

The company, Loop, says its casket is made of mycelium, the underground root structure of mushrooms, and filled with a bed of moss to stimulate decomposition.

“It’s continuously looking for food and transforming it into plant nutrition.”

Mycelium also devours toxins and turns them into nutrients.

“It’s used in Chernobyl to clean up the soil there from the nuclear disaster”, Hendrikx said.

“And the same thing happens in our burial places, because the soil is super polluted there and mycelium really likes metals, oils and microplastics.”

The coffin is grown like a plant within the space of a week at the company’s lab at the Technical University of Delft by mixing mycelium with wood chips in the mould of a coffin.

After the mycelium has grown through the wood chips, the coffin is dried and has enough strength to carry a weight of up to 200 kilograms (440 lb).

Once buried, interaction with ground water will dissolve the coffin within 30 to 45 days. Decomposition of the body is estimated to take only 2 to 3 years, instead of the 10 to 20 years it takes with traditional coffins.

“When the living coffin is in the ground you can even water it, add seeds and you can decide what tree you want to become.”