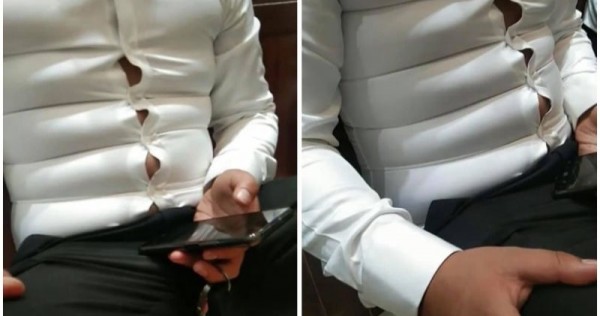 To many, “comfort” is often placed above “fashion” when it comes to personal wardrobe choices.

A Taiwanese man, however, was recently spotted contradicting such principle, wearing a shirt so tight that the strained buttons gave him a “Michelin-style look,” amusing social media users left and right.

The photograph became viral after a woman posted it to Facebook with the caption: “Sir, maybe you don’t feel constrained, but I feel uncomfortable for you seeing you wear that shirt.”

However, the size of the shirt appears to be one size too small, meaning that the buttons strain to keep the shirt closed over his protruding belly.

The post immediately has garnered more than 10,000 likes less than two hours after it was published, with many commenting below, “Is that a caterpillar?”, “Michelin baby!”, “Four layers of meat,” while others also praised the sturdiness of the buttons and wondered where he got his shirt from.