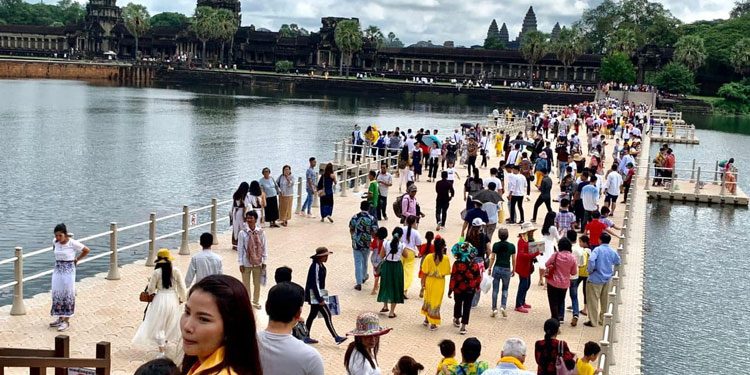 The tourism sector, currently supported almost entirely by local travellers after the pandemic choked off international travel, faces yet another potential period of hardship with the possibility of a second COVID-19 wave.

Tourism insiders say that if the results of those tested in the wake of the recent visit of the Hungarian foreign minister are positive in large numbers then the sector’s hope for avoiding another crash will fade.

Thoun Sinan, president of the Pacific Asia Travel Association, who is in self-quarantine and undergoing testing after coming into contact with the Hungarian foreign minister’s entourage during his Nov 3 visit, fears that local tourist activity will be affected during this time as people wait to see that the situation has not indeed escalated.

“People are waiting to see the result of the testing and quarantine of those contacted directly and indirectly by the November 3 event attended by the Hungarian foreign minister. However, it should not have a long-term impact,” he said.

He said the government’s travel bubble measure will continue even if the possibility of a second COVID-19 wave looms.

“I think the government will be able to control the situation just as well as they did the first wave, particularly because they now have more experience,” he said, adding that we have to wait to see until the last tests on Nov 14 and 18 are released.

“If all the tests are negative or add only one or two positives, then the situation will ease.

He added, though, that many local businesses, especially tourism-related services, have just taken bank loans to restart operations, only to see the possibility of infection rise again.

With no new cases reported prior to the Nov 3 event, government and tourism insiders were in discussions about a travel bubble measure to attract tourists back to Cambodia with the Chinese market set as a priority.

Chhay Sivlin, president of the Cambodia Association of Travel Agents, said that with people now fearful again, it is necessary to view this as a temporary pause that will end if a second wave does not emerge.

The government’s efforts to establish the travel bubble and preparations for a full slate of the year-end events should produce a boost to local tourism if testing reveals that Cambodia has been spared another wave.