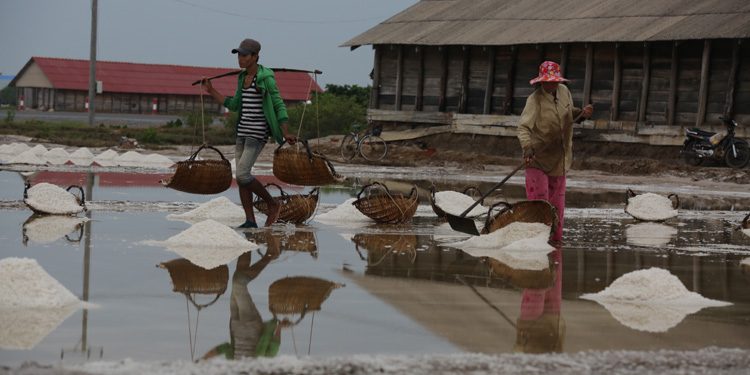 A Cambodia salt producer says that her company’s exports have been stuck in stasis by the COVID-19 pandemic and tough competition among local producers is making things even tougher.Thaung Thyda, the founder of Thaung Enterprise, says her company was focused on exports but with that market inactive, the firm has been targeting the domestic market.

Thyda noted that in mid-2020, sales dropped and expenses rose as the company needed to buy raw materials and other inputs to prepare for exports. She said other challenges encountered were that consumers, Cambodian ones in particular, do not understand the benefits of locally produced salt product fully, specifically the difference between sea salt and factory salt.

She cited consumer behaviour here as preferring imported salt and reports that some suppliers don’t mention the origin of products and even produce salt that can be very harmful to people’s health. According to Thyda, Thai refined salt’s price is 4,000 riels ($1) per kilogramme while domestic salt is normally market-priced at around 2,500 riels ($0.62) a kilogramme.

“It is from Kampot  and we focus on quality to ensure the safety of our consumers,” she said.

Thyda added that salt production has just begun again, but expects that her enterprise and group of member salt producers will be able to produce up to 20,000 tonnes this year. “Our local market consumes around 80,000 to 90,000 tonnes yearly,” she added.

Kampot province produced around 84,000 tonnes of salt in 2020 to supply the domestic market, according to a report from the Salt Farms Bureau of the Kampot Provincial Department of Industry, Science, Technology and Innovation.

Koeng Son Thean, chief of the bureau, said there are 179 groups of salt producers (1,650 farmers) with 3,726 hectares of salt farms in Kampot.  He added the production of salt will take place this year from January through to the end of July.

“By end of this month, all groups of salt producers will be at full capacity and we expect that the yield will be better this year compared with 2019.” He added that from Jan 6 to Jan 12, 2021, salt production reached around 175 tonnes. However, the salt remaining in stock is around 2,346 tonnes.

Huon Sorangsey, director of the industrial affairs department at the Ministry of Industry, Science, Technology and Innovation, said that as salt production has just begun, there is no data yet for the whole production.

“We are working with the provincial industry departments in Kampot, Kep and Koh Kong province to collect the data now,” he added.

Sorangsey said that last year Cambodia produced around 100,000 tonnes of salt but the capacity for production is reliant on the weather. The full production period is four to five months long and requires hot weather to achieve successful yield levels.

“To assist local salt producers, the government exempted them from the taxes including value-added tax (VAT). The government has also supported salt producers and farmers by providing iodine. It has also allowed foreign salt exemption status from import taxes (to a government-specified amount) in order to supply the market when demand outstrips supply,” he added.

There are three provinces that produce salt in Cambodia, Koh Kong, Kampot and Kep, according to Sorangsey.

‘Rape-slay’ case of Philippine flight attendant falls apart: Men she partied with say they are gay