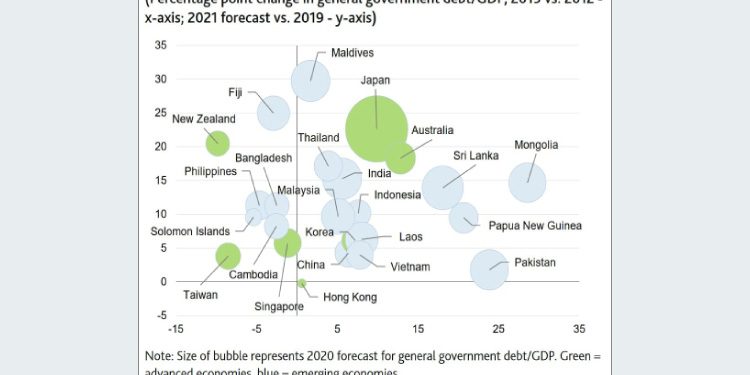 Despite holding a negative outlook on the Asia-Pacific (APAC) region, the rating agency maintained Cambodia’s B2 Stable credit rating after having downgraded several frontier markets including Thailand, Sri Lanka, Laos and Myanmar last year. “The widespread fallout from the pandemic and measures adopted by sovereign [states] to contain it have created an economic, fiscal and social shock that will last into 2021 and beyond,” the rating agency warned.

“Cambodia is particularly exposed to a slowdown in China given their extensive economic linkages – China is the largest foreign investor with the country representing 43 percent of foreign direct investment and Chinese tourists accounting for 36 percent of arrivals in 2019,” Moody’s Vice-President and Senior Analyst Anushka Shah said.

China remains Cambodia’s primary moneylender, with some 40 percent of its $7.6 billion having been loaned by the Chinese government, according to official figures.

“In these cases, sustaining access to cross-border funding markets or external liquidity assistance will depend highly on a commitment to and demonstrated traction on reform and greater macroeconomic fiscal stability,” said the Moody’s report.

While Cambodia’s economy is expected to remain in recovery mode in 2021, it is important to note that the slowdown has its basis in more than its biggest trading partner.

In the midst of the global pandemic, the Chinese government delivered 1,000 containers of raw materials – 60 percent of which was meant for production in the garment and footwear industry – to help the Kingdom’s largest export industry weather the economic storm.

The Kingdom was set to face a significant drop in demand for high-value exports because of trade restrictions – and the impact on growth from the drop in Chinese tourists appears to be a key part of the current slowdown. In 2019, a total of 6,610,592 tourists – more than 38 percent of whom were Chinese –  visited from the mainland. Despite the downturn,  the World Bank forecasts that the Cambodian economy will bounce back and grow by 4 percent this year after having contracted by 2 percent in 2020.

“Significant uncertainty remains in Cambodia’s growth outlook. The most important policy goal must be to urgently regain jobs lost and suspended due to the pandemic,” said Inguna Dobraja, World Bank Cambodia country manager.

“It is essential that domestic and foreign investment are encouraged to take advantage of recent bilateral and regional free trade agreements. This would be possible through the prompt introduction of competitive investment law and incentive schemes, together with moves to improve the ease of doing business.”

National Bank of Cambodia (NBC) governor, named 2021 central banker of the year for the Asia-Pacific region