Cambodia is preparing to export beef to Chinese market 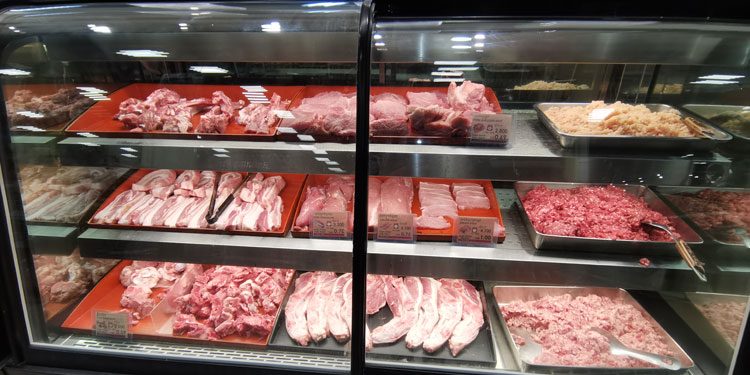 Cambodia is preparing for its first exports of beef to the Chinese market, saying it will benefit from the US-China trade war and trade tension with Australia, which exports most beef to China, according to the Minister of Agriculture, Forestry and Fisheries (MAFF).

Speaking at a contract farming ceremony involving 58 farming communities and exporters at MAFF yesterday, Minister Veng Sakhon said the government is diversifying agricultural products and exports and beef is one the potential foods to send to the Chinese market.

“In the near future, we will access more markets, especially for agricultural products that we are able to produce for export,” he said. “We are preparing to export beef, which is a new product for us because we see the face-off problem between China and Australia.”

Sakhon said this would be an opportunity for Cambodia to produce meats for export to China. The minister said that in this regard, Laos is now one step ahead of Cambodia in terms of plans to export beef to the Chinese market.

“As I know, they have already signed a protocol in order to export beef to China. Chinese experts have already arrived in Laos while Cambodia is preparing to submit to the Chinese side,” he said.

However, the minister said Cambodia would take time for procedures including infrastructure and facilities that support meat production for export. He said Cambodia needs also to fulfil conditions requested by China. “First, we wrote an official letter to the Chinese side stating that Cambodia is able to export beef to the Chinese market,” he said. “After our letter of notification, the Chinese side will come to study our efforts and set some conditions for us. When those requirements are met then we will be able to send the beef.”

With Cambodia and China expected to sign a free-trade agreement soon, Sakhon said that the country with the world’s largest population will be a huge market for Cambodia’s agricultural products.

“We have to think of the long term. The Chinese market is one of the largest markets for agricultural products and China is importing agricultural products from countries such as Brazil and Argentina as well as from the US from where imports take more time and cost more so China wants to import those from countries in the region that are convenient and cheaper for shipping,” he said.

He added Cambodia will import cows from Australia for farmers to breed in Cambodia.

Much of the country’s agriculture sector now uses machinery but the government is encouraging farmers to take on cattle farming for commercial reasons to meet local demand and exports, according to Sakhon.

MAFF is currently urging more contract farming between farmers and exporters in order to ensure good production supply and market prices for farmers. Currently, there are 760 farming contracts signed and it is expected that at the end of this year the number will reach 1,000, according to MAFF.

Gray Ellem, team leader for the Cambodia-Australia Agricultural Value Chain Programme, said that contract farming is playing important role in boosting competition in the markets and it supports the supply chain that helps quality and confident agricultural production.