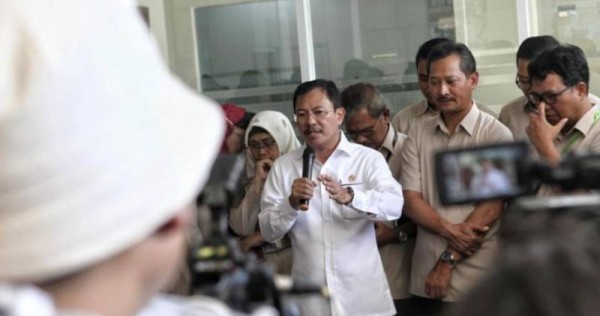 JAKARTA – Indonesia’s House of Representatives members have called on Health Minister Terawan Agus Putranto to rework his communication skills following a series of public gaffes that appear to have persuaded him to lie low despite the country’s battle against the Covid-19 pandemic.

In recent months, Mr Terawan seems to have made fewer public appearance after critics lambasted him for creating numerous controversies, including by playing down the Covid-19 threat at the beginning of the outbreak in the country, despite his position leading the national efforts against the coronavirus.

Mr Emanuel Melkiades Laka Lena, the chairman of House Commission IX overseeing health care, acknowledged that the minister had displayed rather poor communication skills, though he deemed that Mr Terawan had done a good enough job in handling the virus as proven during previous hearings with the legislative body.

Mr Terawan had not been able to inform the public properly about his efforts, therefore causing citizens to question his capabilities, Mr Emanuel said.

“One important issue we have found from the minister and his staff is the lack of public communication skills. (Terawan) has done much, but he doesn’t let the people know,” the Golkar Party politician said on Tuesday (Sept 29).

“The minister must improve his public communication strategy. Many ideas and programs are not well communicated to the public, leaving the latter unaware (of the government’s efforts to combat Covid-19),” he said.

Before Indonesia confirmed its first cases of Covid-19 in March, Mr Terawan was under fire for making light of the coronavirus threat and instead asking people to keep praying.

In February, he dismissed a report by Harvard University researchers suggesting that the Southeast Asian country must already have unreported coronavirus cases, calling the study “insulting”.

The blunder was followed by a series of public gaffes that inevitably made Mr Terawan the subject of ridicule on social media.

The most recent criticism he received came in early September, when he appeared to play down Jakarta Governor Anies Baswedan’s suggestion that the capital city had to return to full large-scale social restrictions (PSBB) amid an “alarming” shortage of hospital beds, with the minister suggesting that hospitals in Jakarta “could still handle Covid-19 patients.”

Mr Terawan previously also stirred controversy after responding to President Joko “Jokowi” Widodo’s criticism regarding low spending on the health sector despite the country’s struggle to contain Covid-19 transmission, saying the low spending was due to a low number of patients.

Mr Saleh Daulay of the National Mandate Party (PAN) defended Mr Terawan against Mr Joko’s criticism, saying the minister needed time to spend the budget with the additional funding of Rp 25 trillion (S$2.3 billion) coming in the middle of the year.

“He needs time. He once explained that he allocated around Rp 21 trillion for Covid-19 patients’ medical treatment and the rest was for medical workers’ incentives and medical equipment purchases,” he said.

Mr Saleh went on to call on Mr Terawan to improve coordination among ministries and state agencies since the minister would not be able to handle the situation alone.

“I urge the minister to provide more medical equipment and medicines in regions throughout the country,” Mr Saleh said.

Cambodia is preparing to export beef to Chinese market