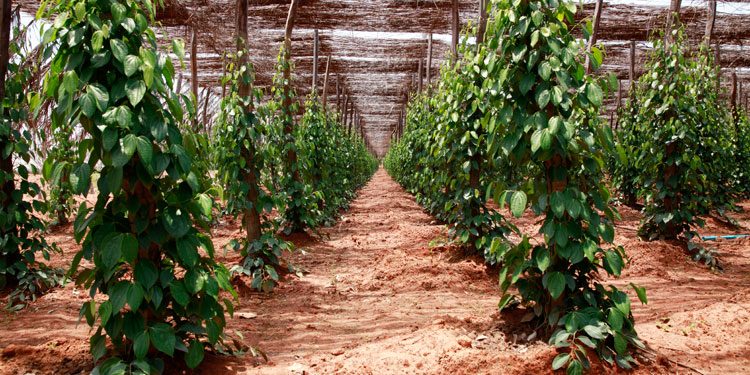 The government is now drafting a policy on pepper with the intention of scaling up a competitive advantage, attract investors and boost added-value to Cambodian pepper production, according to a senior official at the Ministry of Commerce.

As previously reported, Va Rothsan, a senior adviser at the Ministry of Commerce, said the price of pepper in the world, and in Cambodia in particular, has dropped considerably in the last three to four years.

This has prompted farmers and pepper processors to cut their workforces, reduce maintenance of farms and some have even given up pepper farming to grow other crops.

Rothsan said pepper prices have fluctuated over the past 10 years. Therefore, the price will rise again in 2021, but he does not expect much change because a lot of the condiment is stored in warehouses. He said it might rise more in 2022 but not reach the highs of $9 to $10 per kilogramme. He thinks it could be in the range of $5 to $7.

“To rescue the pepper sector, we have to strengthen the Cambodia Pepper and Spices Federation. The government will prepare a policy on pepper to make sure that we have clear guidelines,” he added.

“The pepper policy will show what the potential of pepper is and what competitive advantages it has,” he added.

Mak Ny, president of the Cambodia Pepper and Spices Federation, said that the local consumption of pepper is about 2 to 3 percent of total production. He said Cambodia grows pepper mainly for export.

“The 2 to 3 percent is equivalent to about 500 to 1,000 tonnes of pepper consumed locally. Now, we mostly depend on the Vietnamese market as a destination to export our pepper, but our federation wants to attract more investors or buyers to export directly from Cambodia,” he added.

Ny added that the price of pepper is down, but it is a global issue and Cambodia alone cannot manage and solve it immediately. It is related to oversupply. Normally, global pepper consumption is 400,000 to 450,000 tonnes per year, but global production of pepper is around 600,000 tonnes, which exceeds demand.

“Our Geographical Indication (GI) pepper is around 70 to 100 tonnes per year, organic pepper is 100 to 150 tonnes per year, while good agriculture practice (GAP) pepper is 1,000 tonnes, so the rest is general pepper. Generally, profit from pepper varies according to its source but, on average, if the price is about $2.5 per kilogramme, farmers will see a profit margin, but not much,” he added.

Rothsan, however, said that amid the COVID-19 pandemic, organic and GI pepper are still profitable compared with general pepper. This is what the government is trying to promote to pepper producers: how to grow pepper, how to reduce diseases that affect it and how to reduce the cost of production to make it more profitable.

Some pepper producers and farmers are growing pepper without accepting technical support, he said, adding that the policy that the Ministry of Commerce and nongovernmental organisations (NGOs) are preparing will demonstrate
what can be done to enable pepper farmers to create more added-value to pepper products.

“From next year, pepper prices will be better than previous years. The reason is supply will be cut while global demand will increase,” he added.

According to the Ministry of Agriculture, Forestry and Fisheries, Cambodia produces around 20,000 tonnes per year. The Ministry of Commerce said that the government will draft the pepper policy by next year or 2022. “We have completed the cassava policy and we are drawing up a cashew nut policy and expect that after that we will start on the pepper policy,” Rothsan added. He said the policy will attract more investors, pushing prices up, and action plans for the short, medium and long term will be created with help from relevant ministries.  “For now, we cannot do anything to push the price up, but we are trying to encourage local consumption of pepper products and processing,” he added.