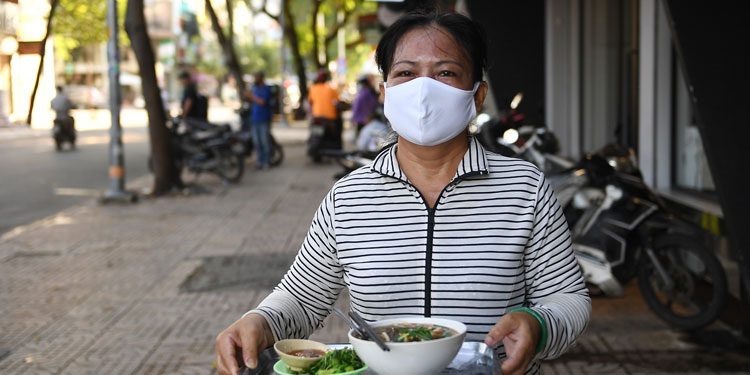 AFP – Vietnam’s famous foods have won fans across the globe, but mounting food safety scandals are worrying the population, who are becoming more aware of pesticides, heavy metals and cases of poisoning, changing their consumer behaviour.

In July, 14 people were taken to hospital in a severe condition after being poisoned by a vegan pate. Many experienced droopy eyelids and paralysed respiratory muscles.

As well as anxiety over hygiene standards, there is growing unease about high pesticide use for vegetables and herbs thrown in typical street food dishes such as fresh shrimp rolls and bun bo, dried noodles with beef.

Some 70 percent of 16- to 30-year-olds said food safety was their biggest concern – ranking the same as job security – when polled by the British Council in Vietnam this year.

“Banned pesticides are being used, the environment is polluted and agricultural products are being sent back after being shipped abroad,” he told state media.

Problems with food safety cost Vietnam around $740 million per year in productivity, the World Bank says.

But across the country, from lush countryside fields to tiny urban rooftop gardens, Vietnamese are doing what they can to ensure they eat safely.

Ngo Xuan Quyet, 26, used to sell pesticides for a living before switching to “safe” farming.

“When I worked [at the pesticide company] I really got to know about the chemical substances in them,” said Quyet, who studied agriculture at university.

Heavy metals found in soil or water used for agriculture in Vietnam may be a significant contributor to the incidence of some forms of cancer, the World Bank says, while heavy pesticide use may also have long-term impacts.

In southern provinces, between 38 and 70 percent of farmers used pesticides higher than the recommended level in 2014 – the latest figures available – according to the ministry of agriculture. The amount of pesticide used in Vietnam has remained relatively stable since then, it says.

A ban on the import of herbicides containing glyphosate, classified as “probably carcinogenic” by the World Health Organization, will come into force next year but it is unclear how rigorously it will be enforced.

A growing proportion of the county’s urban consumers are willing to pay the extra, according to the World Bank – while some are largely turning their backs on traditional street food stalls.

“About two hours after lunch I started feeling unwell. I went home and I started vomiting,” she said.

Rushed to hospital by her husband, doctors told her there was only one explanation: food poisoning.

Lan didn’t eat out for a month after her scare and frequent high-profile food safety scandals have fed others’ fears, joining rising anxiety over Vietnamese food staples that are popular around the world.​